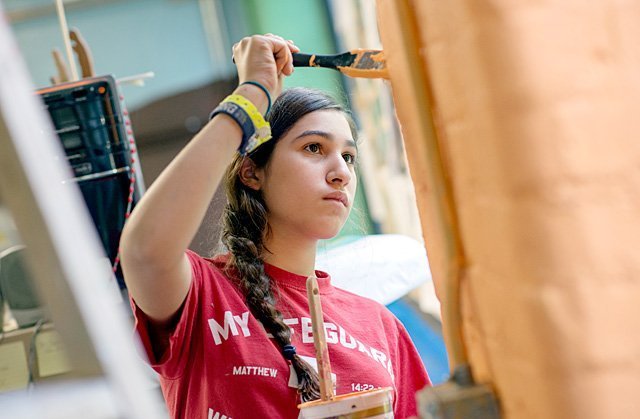 Fifteen-year-old Grace Mattina of Pittsford took part in the SHINE Catholic Work Camp in Rochester Aug. 4-8. Above, she does some painting at St. Michael's Woodshop Aug. 7.

Meanwhile, Krista Vancophsky was dabbing paint on a mural of the sun with triangular rays shining down on several curly-leaved plants with exposed roots. A caption with the painting said, "Grow in good soil."

That message will greet teens each time they walk into St. Michael’s Woodshop in Rochester. A ministry of Fairport’s Church of the Assumption, the woodshop’s staff and volunteers teach teens woodworking and life skills.

At the woodshop, SHINE Catholic Work Camp volunteers installed new flooring and shelves as well as helped tidy the workspace.

"They have been helping us clean, organize, sort things out and they have also been woodworking with the kids," said James Smith, executive director of the woodshop.

Teens from the Franklin Lakes, N.J., parish of Most Blessed Sacrament were among the youth groups that took part in the camp; they were stationed at the woodshop all week, said Youth Minister Jen Fox, who traveled with her husband, Paul, and Vancophsky, the office manager for the parish.

"We were incredibly blessed to come here (to the woodshop) and establish a relationship and let the kids see progress throughout the week," she said.

"We’ve been doing a lot of painting, which is something I don’t really do, so it’s been a lot of fun," said 16-year-old Hope Rice of Franklin Lakes, N.J., who will be a junior in high school. "I know there were some groups doing yard work, so this has been good."

The students also got to have a talent show to cap off the week, and the New Jersey youth group planned a trip to Niagara Falls for sightseeing on the final day of their trip. As for Rochester, the teens spent some time driving around the city as they made their way to the worksite.

"I haven’t seen much, but it looks like a lot of people need help, so that’s why we are here — to improve people’s lives," said Nick Hoffman, 15, of Franklin Lakes, who will be a sophomore in high school.

Grace Mattina, 15, of Pittsford, who will be a sophomore at Pittsford Sutherland High School, was assigned to work with the Franklin Lakes group for the week. Although she has served the community in several ways, she said this was her first time at the woodshop.

"I have been to a lot of retreats before, but I think this one gave me a sense of what you can do for those in the community and the church," Grace said.

Teens from the woodshop also got the chance to teach teens with the work camp some of the woodworking skills they have learned. Some of the SHINE students built and decorated birdhouses, following the woodshop’s birdhouse patterns.

"We learned more from them and they learned from us," said Wilberto Martinez, 16, a student at the Leadership Academy in Rochester. He has been working with the woodshop since it reopened in 2013 after a brief hiatus due to a leadership change.

Stationed at the woodshop was JaiMichael Leal, the 15-year-old son of SHINE Catholic Work Camp founders Augie and Dawn Leal, who were Houston, Texas-based youth ministers before they started SHINE.

JaiMichael said one of the advantages of SHINE is that it shatters teens’ stereotypes and misconceptions of others by bringing them in direct contact with the people they are serving.

"I know people at the houses in the neighborhood talk," JaiMichael said of the Rochester contingent. "There’s one woman and she talks to them and tells them stories and they get to know the residents and through that they let go a little bit (of stereotypes)."