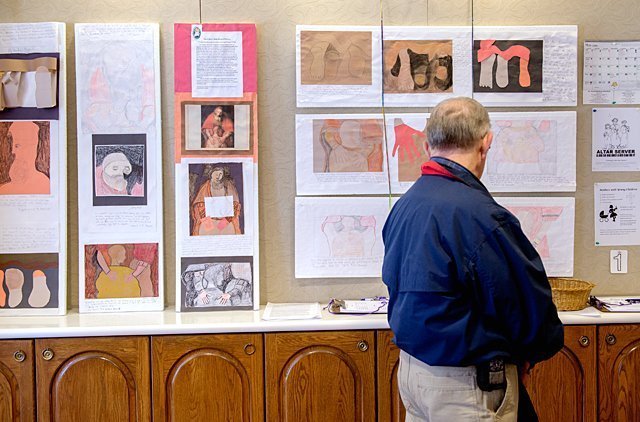 Auburn teens preparing for the sacrament of confirmation recently created artwork depicting sections of Rembrandt’s Return of the Prodigal Son. On May 8, their artwork was displayed in the narthex of St. Alphonsus Church in Auburn.

Fourteen-year-old Andrew Bishuk has known the parable of the prodigal son for as long as he can remember. It wasn’t until recently, however, that he really reflected on the meaning behind the familiar tale.

In March Andrew and more than a dozen other young members of Auburn’s Catholic parishes gathered to listen to the parable, read Henri J. M. Nouwen’s The Return of the Prodigal Son and study a Rembrandt painting of the same name.

"I (already) knew the story of the prodigal son, but up until then I didn’t really know what it meant," Andrew said. "It’s actually a pretty good life lesson, if I do say so myself, because it shows how even though you can get so far off and you can be like the worst person in the world, you’re always welcome and accepted."

After learning more about the parable of the prodigal son, Andrew and many of other Auburn teens who are preparing to receive the sacrament of confirmation next year created their own works of art inspired by the parable. Those creations currently are on display along with a pair of newly created "holy doors," which are spending several weeks at each Auburn parish this spring and summer, according to Mary Ellen Durante, who was director of catechesis for St. Mary, Sacred Heart, St. Ann, St. Alphonsus and Ss. Mary and Martha parishes in Auburn until early May.

"The Auburn Holy Doors of Mercy have been designed with the intention to bring forward the significance of the Extraordinary Jubilee Year of Mercy that Pope Francis proclaimed from December 8, 2015, through November 20, 2016," Durante said. 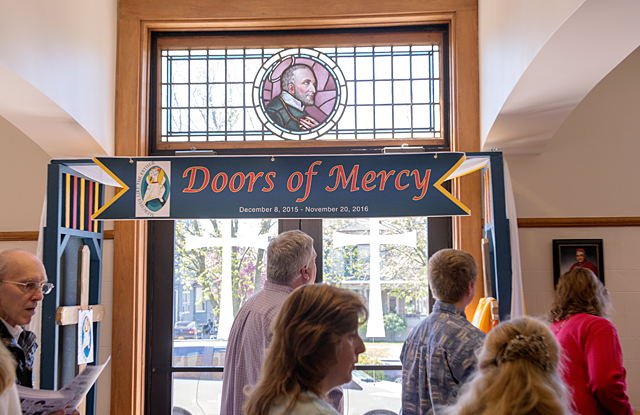 During the month of May, two portable "holy doors" flanked the entrance to Auburn’s St. Alphonsus Church in celebration of the Extraordinary Jubilee Year of Mercy.

These portable doors were built by Sacred Heart parishioner Richard Powers and painted by faith-formation students, and although they are inspired by Pope Francis’ proclamation, they are not the official holy doors of the Diocese of Rochester, Durante noted. One of the central inner entrance doors of Rochester’s Sacred Heart Cathedral has been designated as the diocesan Holy Door of Mercy, and Durante hopes Auburn’s traveling doors of mercy will encourage parishioners to travel to Rochester to walk through the holy door at Sacred Heart Cathedral. Catholics who walk through the cathedral’s holy door may receive a plenary indulgence — or remission of temporal punishment deserved for sins — if they also receive the sacraments of reconciliation and Eucharist, pray for Pope Francis and his intentions, and pray the Profession of Faith.

Auburn’s holy doors spent the month of April just inside the entrance of Sacred Heart Church, and in May they flanked the entrance to St. Alphonsus. They will be at Ss. Mary and Martha Parish in June and at St. Mary Church in August. In each location, the doors will be accompanied by a display of the artwork created by Andrew and a number of other confirmation candidates, and parishioners are encouraged to cross through the doors, look at the artwork and reflect on the theme of mercy, Durante said.

"I thought that it would be kind of a neat way for the confirmation students to begin to evangelize," she said, noting that many of the parishioners who passed through the doors at Sacred Heart Church in April took time to study the students’ artwork. "I think it really helped people engage in the Year of Mercy. It makes it more meaningful."

One Sacred Heart parishioner even sent Durante a card to thank her and her students for their efforts. This parishioner said the experience of seeing the students’ artwork enriched her spiritual experience and caused her to reflect on the meaning of God’s mercy in her own life, Durante said.

Durante said she’s glad she and the students were able to help make the Year of Mercy a more concrete and rich experience for parishioners.

"I think that it’s important to take the time in our busy lives to stop once in a while and really pay attention to what the Holy Father is trying to share with us, because there’s a lot of wisdom from someone like Pope Francis that can help you understand the real meaning and purpose of what your life is. That is what I’ve tried to really share with the children here," Durante said.

The confirmation students were enthusiastic about the project and seemed to walk away with a deeper understanding of the parable of the prodigal son, she added. The art project was one of two options available to confirmation students, and students who chose the other option paired up, prepared presentations about the Year of Mercy and gave those presentations after weekend Masses at their parishes. Both projects helped students realize the importance of mercy in their lives, she said.

"What does the world need more today than compassion and mercy and forgiving each other and realizing we’re all here on this planet sharing it?" Durante asked rhetorically.