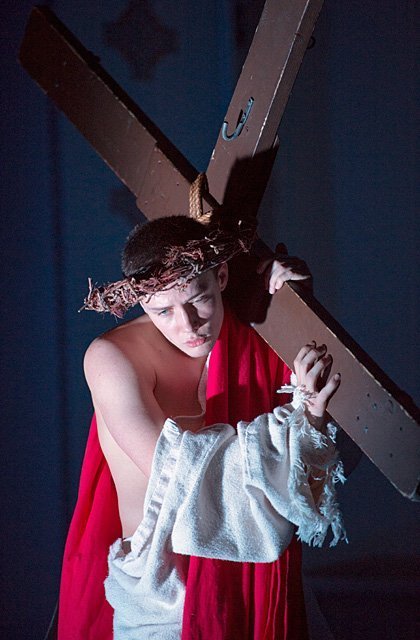 Chris Newhook, a member of The Franciscan Mystery Players, plays the role of Jesus during a Living Stations of the Cross performance March 6 at Victor's St. Patrick Church.

VICTOR — The Stations of the Cross came to life March 6 at St. Patrick Parish, courtesy of a group of 19 teens and adults from a parish in the Thousand Islands.

"It was phenomenal. I always think about the Stations of the Cross during Lent, and this was beautiful," parishioner Marge Adams remarked after the performance.

The Franciscan Mystery Players of St. Mary Parish in Clayton, N.Y., is one of 11 such groups across the country that travel from parish to parish performing mystery plays. Based on such themes as the Stations of the Cross, the birth of Jesus and the sorrowful mysteries of the rosary, these plays incorporate prayer, meditations, and dramatic music and lighting as they encourage audience members to open themselves up to the thoughts and emotions triggered by the scenes they witness.

"The most important thing tonight is not what you see, but what you are feeling and experiencing inside yourself," a narrator explained at the start of the March 6 performance.

In one of the play’s earliest scenes, a blue light illuminated a white robe hanging from a pole as a narrator painted an emotional scene in spectators’ minds.

"There is a mother, collapsed on the ground, kneeling before her murdered son," the narrator said, describing Mary’s desperate embrace of her cold, lifeless son after Jesus’ death on the cross. "Her hands clutched at his feet as if begging him for life, but there is none."

Shortly after that, a narrator announced that God loved the world so much that he sent his only son to be a light for it. As those words were spoken, a teen clad in jeans and a hooded sweatshirt and wearing a full backpack walked slowly down the center aisle toward the robe on the pole. Upon reaching it he asked aloud whether this cup of suffering might pass him by, and a few moments later asked that if the upcoming suffering were inescapable, that it be done according to God’s will and not his own.

He then reached up, lifted the robe off the pole, took off his sweatshirt and slipped the robe on before stepping out of his jeans. A few minutes later several other young actors, also clad in contemporary clothing, walked up to him, took off their jackets and put on robes and veils, and the Way of the Cross began in earnest.

Throughout the play, the events marking the Stations of the Cross were interspersed with contemporary reflections in which narrators asked the spectators to consider the ways they experience the Stations in their own lives. In these reflections, contemporary crosses took the form of illness, chronic pain or unemployment; the compassion Veronica showed to Jesus was echoed in the examples of a teen who helped a friend depressed by peer pressure or a wife who tenderly cared for her ailing husband; and lies and wars were likened to the nails hammered into Jesus’ hands and feet.

At the end of the performance, spectators were asked to come forward, stand around the cross with the actors and pray together. They were invited to name their intentions, and some of the actors prayed for those gathered in the church that evening.

It’s this focus on prayer that has been the secret of the group’s success, noted Christine Woodley, its director for the past nine years. Prayer not only gives the performance its emotional power, but also bonds the players together, she told the Catholic Courier after the March 6 performance.

"We pray for an hour before every practice and every play," she said. "I think it’s really that hour of prayer that drives the kids."

Gathered in a circle, the players begin with prayers of thanksgiving followed by prayers of petition. Many of the teens’ prayers are about arguments with family members, difficult tests or being bullied at school. They feel comfortable praying about these things out loud because the members of the Franciscan Mystery Players have formed their own family of sorts, Woodley said.

This family is like any family formed by members of a sports team or extracurricular activity, but the bonds seem to be especially deep because of that prayer connection and because of the emotional and spiritual nature of the plays’ subject matter, she added. The scene at the beginning of the play when the teens transform into Jesus, Mary and the others present at the crucifixion is particularly powerful for both the teens and the audience members, she said.

Everyone involved in the plays makes sacrifices in order to participate in the six hours of practice required each week on top of the time commitment involved in traveling to various parishes, noted 18-year-olds Kim Korcz and Chris Newhook. These sacrifices are worth it, however, because being able to spread the word of God is "so powerful," noted Korcz, who codirected the play.

"It’s brought me a lot closer to God and gotten me to be stronger in my faith," agreed Newhook, who portrayed Jesus.