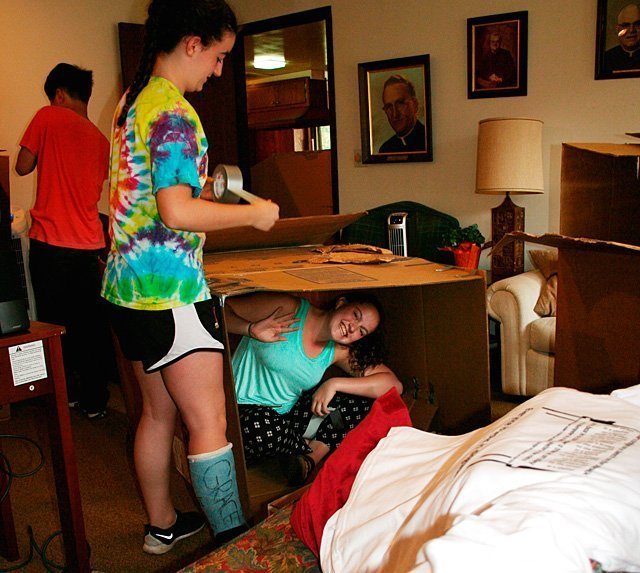 Claire Galanthay (standing) and Bridget Fetsko create shelters out of duct tape and cardboard at the St. Catherine of Siena Parish Center May 30 in preparation for the Sleep-Out for the Homeless event.

Around 1 a.m. on May 31, young teens ventured outside St. Catherine of Siena Church to occupy the cardboard beds they’d made earlier in the evening. Their structures had already incurred damage due to thunderstorms that had just passed through.

A couple of hours later, temperatures took a 20-degree nose-dive. The frigid air, along with howling winds and steady, cold rain further weakened the makeshift beds, rendering the prospect of sleep even more difficult, if not impossible.

"The next morning (the youths) were chilled to the bone and exhausted. We went through a reflection, and you could tell it was hard for them to form thoughts because they were so tired," remarked Ashley Blank, event organizer.

As grueling as the experience was, it was only a microcosm of the pain of actual homelessness, when such necessities as shelter, food, clothing, money, employment, transportation, health care and storage space are constantly lacking.

"We talked about how that would be to feel this each night, and especially during the winter," said Blank, who serves as St. Catherine’s faith-formation coordinator.

Attempting sleep in such primitive style was the key component of Sleep-Out for the Homeless, which took place May 30-31 and provided an intense education about homelessness and poverty in the local community and beyond. Eleven youths and a handful of adult chaperons took part.

After opening prayer in the late afternoon Saturday, participants constructed their shelters using cardboard boxes and tape, brought them outside and added tarps for protection. They then heard a presentation by three representatives of the Rescue Mission, a local homeless shelter, who told of their work along with their personal experiences with poverty.

"They explained that the littlest things, such as coming down to the center and chatting with the people there, or writing a card to them, mean a world of difference," Blank said of the speakers.

Next up were a poverty quiz; simple dinner of bread, water and soup; and poverty simulation and discussion. During this time the teens learned that one in five children in the United States are living in poverty, and the poverty line is roughly $22,000 of annual income, as well as other facts about homelessness. Participants also broke up into "families," and applied poverty-line income toward such regular monthly expenses as rent, cars, child care, food and medical bills. Only one group had any money remaining at month’s end; the other groups went into debt and learned about incurring late fees that make recovery even harder.

"It was eye-opening for them to understand how it (debt) can just snowball," Blank said.

The youths, aided by adult volunteers, then made eight meat lasagnas and nine vegetarian lasagnas that were brought to Loaves and Fishes, a local outreach that provides free meals. Then came a screening of "The Pursuit of Happyness," a 2006 movie starring Will Smith that is based on a true story of a salesman and his young son who become homeless.

At 12:30 a.m. it was time for the sleep-out. Blank noted that youths were not allowed outside as planned until the thunderstorms had passed, and due to the wet conditions, they had the option of sleeping indoors on a floor — but all said they wished to deal with the elements.

"The kids were really troupers and came into this experience determined that they wanted to at least get one night to learn firsthand what it would be like to be homeless," she said.

The 6 a.m. Sunday wake-up call was followed by prayer, reflection and attendance at St. Catherine’s 9 a.m. Mass to close out the event. Topics of discussion that morning included the need to volunteer and donate to alleviate homelessness; to not sidestep the subject of homelessness; and to encourage others to embrace these issues as well.

"Even though they may be youth, they can make a difference," said Blank, who noted that St. Catherine’s young people raised $450 that was donated to Rescue Mission; collected three boxes filled with canned food that was given to a local food pantry; and collected 10 large boxes of clothing that went to Rescue Mission and Covenant House in New York City.

Blank said that going forward, youths were challenged to describe their Sleep-Out for the Homeless experience on social media and in general continue encouraging others to get involved in addressing the plight of the homeless.

"One youth discussed the idea of creating a club at school that would allow teens to actively go out and help the poor," she said.