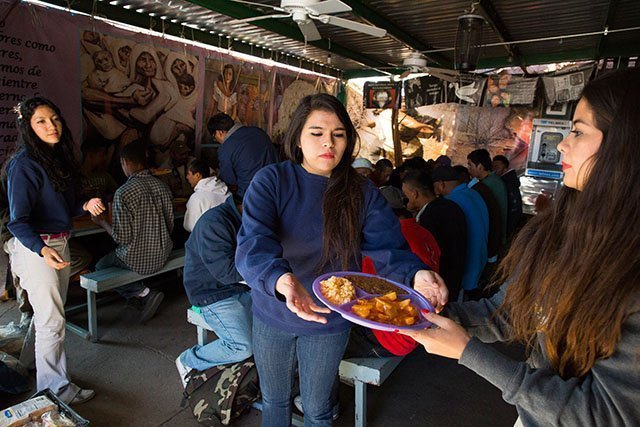 NOGALES, Mexico (CNS) — In a soup kitchen just across the U.S. border, Nicole Davison sat down at a table lined with men.

There was a clatter of plates as the guests who were served dinner help clear the dishes. The guests all had been recently deported from the United States.

Davison, 19, learned that one man had been working in the U.S. for more than 20 years, and that his wife and children were at home in Scottsdale, Arizona.

A Mexican without a U.S. visa or work permit, the man was now stuck here, where he knew no one.

"It’s very sad," said Davison, as she and other members of a group called Kino Teens departed the "comedor," the kitchen and dining hall of Centro de Atencion al Migrante Deportado (Aid Center for Deported Migrants) in Nogales, in the state of Sonora.

Kino Teens was created five years ago at Lourdes Catholic School in Nogales, Arizona, a couple of miles away on the other side of the border. The group supports the Catholic-run Kino Border Initiative, working in Mexico and the U.S. for more humane and viable migration solutions. In Mexico the initiative operates the center and a nearby shelter for deported women and children.

The Kino Teens have a three-pronged approach — service, education and advocacy.

"We dedicate ourselves to follow in the steps of Father (Eusebio) Kino in his example of showing solidarity with those who are in less favorable circumstances," said Gerardo Perez, a 17-year-old student.

It’s a club that fits in well with the mission at Lourdes, according to Sister Barbara Monsegur, the high school’s principal and a Minim Daughter of Mary Immaculate.

"We push respect for each other like you wouldn’t believe," said Sister Monsegur, adding that the school focuses a lot on the church’s social justice teachings. "What we emphasize with the students is that everyone is entitled to human dignity."

The high schoolers have taken the stories they’ve heard at the comedor to the Arizona state Capitol and to lawmakers in Washington.

The students have lobbied Republicans and Democrats alike for laws and deportation policies that won’t divide families.

"The main focus that we have is family unity," said Davison, the current group leader. 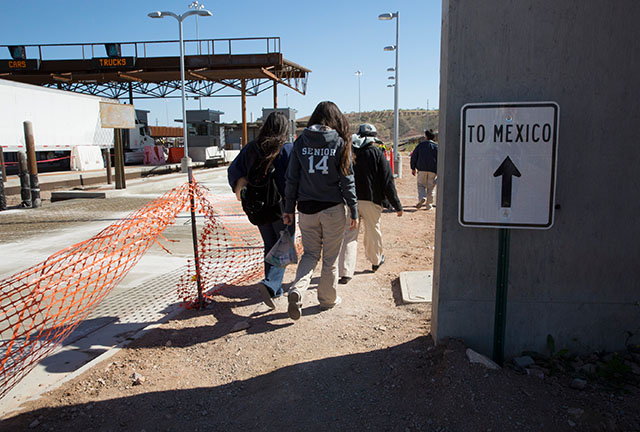 A group of Kino Teens heads toward Mexico at the Mariposa border crossing in Nogales, Ariz.

Some of the Kino Teens live in Mexico and attend school at Lourdes with student visas. All of them speak fluent Spanish and English.

Both Mexican and American students regularly cross the border to go to school, visit family, see friends and volunteer at the comedor. In Sonora they often take advantage of the $4 movies.

Some of the teens refer to Nogales as the "split city," and all of them agree that the better food can be found on the Sonoran side, which has about 10 times the population of the Arizona town’s 21,000 residents.

"You have not eaten Mexican food until you eat in Mexico," said Perez.

"I live on the American side, but I cross two, three times a week to visit my grandma or to hang out with friends," he said. "For us crossing the border is something that happens every day."

They do it even though they know that they may face an hour or more wait to pass back through the U.S. immigration checkpoint.

"They live on the border, so in that way they address this issue from where it is a reality," said the priest. "And their engagement with their peers is very powerful."

One of the group’s summer events is Border Days, for which students from outside Nogales join the Kino Teens as volunteers at the comedor and other "immersion experiences." Those may include a walk along what’s called the Devil’s Highway, a stretch of rough, mountainous desert between Tucson and Yuma, in the Arizona’s southwest corner, often traveled by undocumented migrants. They also visit farmers and ranchers near the border to see how illegal immigration affects them.

During Advent, the Kino Teens put on a Las Posadas play for migrants on the Sonoran side of the border. Las Posadas is a re-enactment of Joseph and Mary’s search for lodging in Bethlehem.

"The migrants can relate to Mary and Joseph looking for shelter," said Davison, of the traditional re-enactment, replete with songs and concluding with a party. "It’s like how they are looking for a better way of life."

Their efforts have sparked interest from other schools. In 2012, a Kino Teens chapter formed at Brophy College Preparatory in Phoenix after a few students from the Jesuit school took part in Border Days.

In their talks with their peers, the teens aim to break stereotypes people may hold about contemporary immigrants.

When people say migrants do not bring any added benefit to U.S. culture, Perez points to two values he has seen in most of the people he has met through Kino Teens: a strong work ethic and equally strong family values.

Despite growing up right at the border, both Davison and Perez admit that much of the migrant experience was foreign to them until they joined Kino Teens.

"I knew about immigration issues, but I wasn’t aware of immigrants really and the struggles they face," said Davison.

Perez, a self-described bookworm, said before joining Kino Teens he was blind to the migrants around him.

"There are things in the community you don’t see — things that you can help with," he said. "Once you actually see, you can say well, ‘What can I do?’" 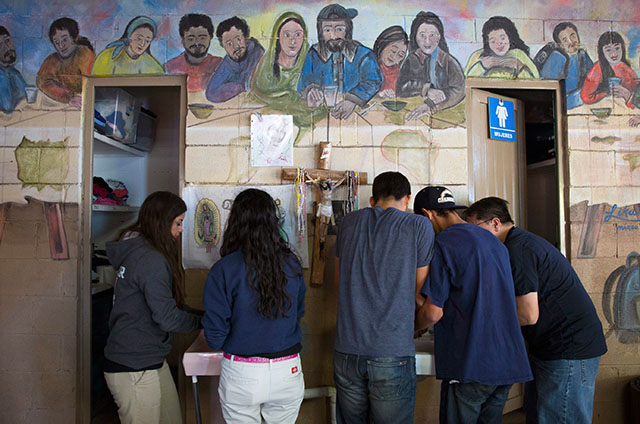 Kino Teens volunteers wash their hands before serving food at the dinner in the kitchen and dining hall of Centro de Atencion al Migrante Deportado (Aid Center for Deported Migrants) in Nogales, in the Mexican state of Sonora.

Mexican immigrants are by far the largest group living in the U.S. without documentation. They account for just more than 6 million, or 55 percent of the estimated 11 million, according to the Pew Research Center.

Most of the deported migrants who pass through the Kino Border Initiative center in Nogales originally came from Mexico’s south, especially the states of Guerrero, Chiapas and Puebla, the poorest in the country. The center gathers some basic demographic data from the people it serves.

Last year the comedor served more than 45,000 meals. The Mexican nuns who manage the soup kitchen, the Missionary Sisters of the Eucharist, also took in 479 women and children at Nazareth House, the nearby shelter.

To get started, the Kino Teens received funds from Migration and Refugee Services of the U.S. Conference of Catholic Bishops. The Conventual Franciscans have also lent their support.

Their adviser is a laywoman, Teresita Scully, Lourde’s theology teacher and campus minister. Scully accompanies the teens to the comedor and advises them in their advocacy and lobbying work.

The teens said Scully, the Minim Sisters and the Missionary Sisters at the comedor are their inspiration for going about what they do with joy.

"You always see this smile, even if they have had a bad day," she said. "They always say a prayer or refer to something from Christ. Their faith comes from within them."

For encouragement, Davison looks to a smiling woman who works at the migrant center.

"For me she’s a real inspiring woman and nun because of her service that is completely selfless. She inspires me to keep on. I want to be like her."

Tags: Faith in Action
Copyright © 2022 Catholic News Service, Inc. All rights reserved. Linking is encouraged, but republishing or redistributing, including by framing or similar means, without the publisher's prior written permission is prohibited.