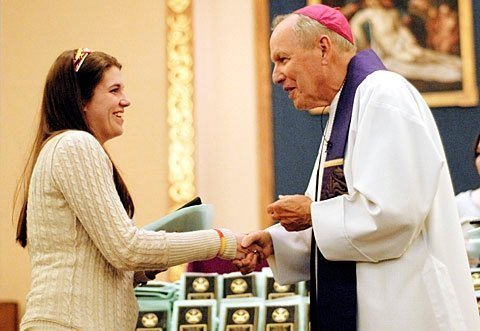 Aryn Smith, a parishioner of Hornell's Our Lady of the Valley Parish, receives her Hands of Christ award from Bishop Matthew H. Clark March 28 at Greece's Our Mother of Sorrows Church. (Click here to view more photos from this event and/or buy prints.)

GREECE — Sister Laurie Orman stood at the pulpit at Our Mother of Sorrows Church March 28 and pondered aloud what it means to be a disciple of Christ in today’s world.

"When I was 18 and sitting in church wondering where my journey was going to take me, I wish someone had helped me understand what it means to be a disciple of Christ, and how I should live that out," said Sister Orman, youth-ministry director at Holy Trinity Parish in Webster.

The nearly 200 teens sitting in the pews in front of the Sister of Mercy already knew a little bit about what it means to be faithful disciples, as they were among the 712 high-school seniors Bishop Matthew H. Clark honored with the diocesan Hands of Christ recognition in late March. The recognition honors high-school seniors who’ve been actively involved in service to their communities, churches and schools. Bishop Clark presented the honorees in the Class of 2011 with plaques and handshakes at the March 28 ceremony and at similar ceremonies held March 26 at St. Catherine of Siena Parish in Ithaca and March 30 at St. Joseph Parish in Penfield.

Sister Orman said she began to learn more of God’s plan for her through her everyday interactions with people, and she felt the first stirrings of a vocation as a woman religious while she was on a mountaintop religious retreat that incorporated hiking, rock climbing and exploring dark caves.

"It was in those moments that God spoke to my heart in a way I had never experienced," Sister Orman shared.

In a cave on that mountain, she learned to be open to her own vulnerability and to become comfortable with only seeing what lay within the glow of her headlamp. In a similar way she’s begun to understand that God has a plan for her, although she may not be able to see what lies in that path ahead. Such knowledge of the future is not necessary in order to be a disciple, she said, noting that discipleship is a process of questioning, growing and starting to become like Jesus.

"This event is one point on your journey as a disciple that will lead you on new paths to new experiences," Sister Orman said. "Ask God, ‘Where are you calling me to be?’ Listen to God’s response. Trust that God will continue to lead you as you grow even deeper as a disciple of Christ."

Hands of Christ recipient Carley Wenderlich said the people around her have greatly influenced her growth as a disciple. Carley, who belongs to St. Lawrence Parish in Greece, said her parents have always encouraged her to serve others as often as possible. Carley has taken that advice to heart and volunteers often. She also belongs to the parish youth group and is grateful to have such a close-knit group of friends with whom she feels comfortable discussing her Catholic faith. Like many of their fellow Hands of Christ recipients, Carley and her youth-group friends enjoy going to retreats and conventions, but they also make time to volunteer together in their parishes and communities.

"As Catholics, our role here on earth is to be the hands of Christ. If we don’t do it, who will?" Carley asked rhetorically.

After presenting the plaques to Hands of Christ recipients, Bishop Clark said his everyday interactions with friends, colleagues and strangers also help him grow as a disciple.

"Discipleship goes on for as long as we live. I just get more aware the older I get that God calls me every day in some way or another. My job is to find out what that call is and to find the right way to respond to it," Bishop Clark said. "God is never done with us, never."

Hands of Christ recipient Erica Misso said she definitely has not finished serving others.

"I want to become a nurse. I want to help the sick people, the elderly," said Erica, who belongs to Catholic Community of the Blessed Trinity in Wolcott, Red Creek and Fair Haven.

Anthony Wagner of St. Pius Tenth Parish in Chili said so far it’s been fairly easy for him to live out his faith because he’s grown up and been surrounded by people who also believe it’s important to be disciples. Aryn Smith of Our Lady of the Valley Parish in Hornell agreed, noting that her family makes it easy to follow God’s call. Aryn said she tries especially hard to be a good disciple because she wants to provide a good role model for her younger siblings and cousins.

"It makes them want to follow in my footsteps," Aryn said.

Fellow Hands of Christ recipient Michael Spoto belongs to St. Jude the Apostle Parish in Gates and attends McQuaid Jesuit High School, where the students form a brotherhood and encourage each other to live out their faith, he said.

"I think that as a family, brothers, we compel each other to do this kind of thing," Michael said. "I think there’s definitely a lot more to distract us these days, but I don’t think it’s as difficult as people perceive it to be."