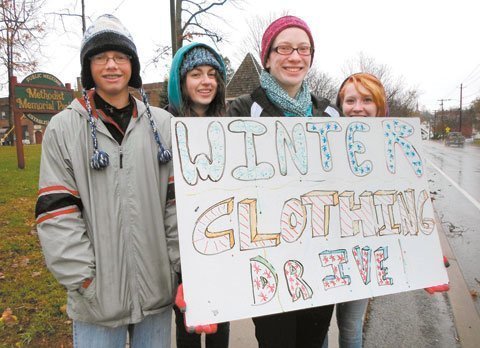 Can spending a night in a hotel help young people learn more about what it’s like to be homeless?

It can if that hotel is made out of cardboard boxes.

That’s what members of the high-school faith-formation class at St. Peter Parish in Shortsville, Phelps and Clifton Springs learned Nov. 3-4. That weekend they held a winter clothing drive in Methodist Memorial Park in Phelps, where they spent the night in a cardboard contraption they dubbed the "hobo hotel."

"There was snow, there was rain, there were high winds. They had fun, but they wouldn’t want to sleep that way every night, which was the point, to raise awareness," said Sheryl Brown, St. Peter’s faith-formation and youth-ministry coordinator.

The clothing drive was the teens’ idea, Brown noted. The teens have been learning about their faith and the tenets of social justice in their faith-formation classes for years, and now that they’re in high school they want to put what they’ve learned into practice, added 15-year-old Rachel Murphy.

"We decided we wanted to do more community-service type things. We’re taking action. I like it better," Rachel explained.

The teens had a brainstorming session and came up with a whole list of service activities they wanted to do, Brown said.

"One of the boys suggested we do a clothing drive. I threw out the suggestion about sleeping overnight in cardboard boxes to make it a little more challenging and help them understand homelessness," she added.

"Otherwise the kids planned it all for themselves. They came together and did things on their own, and put this together in less than two weeks time," Brown said.

The teens made posters announcing the drive and hung them all over their towns, and they also arranged for the drive to be mentioned during their schools’ morning announcements each day leading up to the event. When the day of the drive arrived, they worked in two-hour shifts to accept the donated coats, gloves, hats, mittens, snow pants, sweaters and blankets that poured in between 10 a.m. and 6 p.m.

"During the day we were out by the road. We had our signs and we were asking people to come and donate," Rachel said, noting that parents brought some donated items overnight and a few more trickled in before Mass the next morning. "When we left there was a pretty big pile up to my waist of coats and everything."

At 6 p.m. all the teens who were able to stay overnight started building their hobo hotel.

"We figured we’d get it in before the dark came," Rachel explained.

They put a large ground cloth down first, then opened and taped together the flattened refrigerator, washer and dryer boxes they’d received from Lowe’s home-improvement store. They arranged the boxes next to each other in long rows, with one end of each box open so the teens could crawl in and out. They put a large tarp over the boxes to keep the rain and snow off of them, and held the tarp down with a few pieces of firewood, Brown said.

"We spent probably a half hour getting all our boxes taped and set up. After it was set up we hung out. We had pizza. We set up a fire. We kind of played off the whole hobo idea. At night we played hide and seek," Rachel said.

The teens went to bed sometime between 10 p.m. and midnight, and most of them slept until at least 6, Brown said.

Rachel said her box was chilly overnight but she still slept relatively well until early morning.

"It just so happened that my box decided it was going to collapse at 3 in the morning. When I woke up in the morning the top was three inches from my face, and when I tried to push it up, all the water that had collected on top fell in my face," she recalled.

Once all the teens were up, they broke down their boxes and cleaned up their campsite before heading to Mass at 10:30 a.m. The teens and adults were a bit self-conscious about their disheveled appearances, but the parishioners didn’t seem to mind, Brown said. In fact, after the teens stood up and explained to parishioners what they’d been doing for the past 24 hours the parishioners seemed very impressed.

"I was very proud of them," Brown said of the teens.

After Mass the teens collected $241, which they donated to the Phelps Community Food Cupboard, she added. And after that, at least a few of them went home and took long naps, Rachel added.

"It was a lot of fun and I wasn’t tired at the time, but then when you get home it kind of hits you that you just spent the night in a box. I think if I had to do it for more than one night I would crash and burn," she said. "We had a great time but at the end of the day it was nice to look back at what we’re fortunate enough to have and be able to help the people who don’t have as much."