Teens sweat it out to help others - Catholic Courier 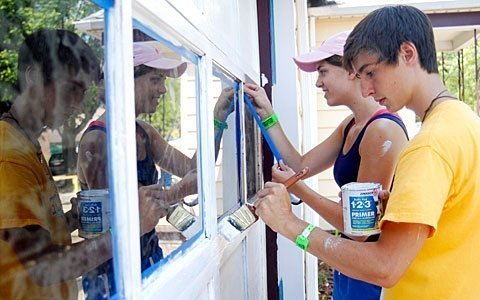 ROCHESTER — Gwendolyn Turner was grateful for the sweaty teenagers who descended on her home.

The perspiring teens were participating in SHINE Catholic Work Camp. At Turner’s home, they helped build a wheelchair ramp overtop a crumbling porch and painted her garage a crisp white.

They matter-of-factly contended with temperatures that topped 90 degrees by wearing hats and sunscreen and taking frequent water breaks.

"It’s hot," said Kylie Nelsen-Freund of New Berlin, Wis., who was one of the teen campers. She is a parishioner of St. Mary’s Visitation in Elm Grove, Wis.

Nelsen-Freund was one of more than 100 teens who came to town July 18-23 to work at homes and locations connected to St. Frances Xavier Cabrini Parish in Rochester. In addition to serving in the community, the teens stayed overnight at Brighton’s Siena Catholic Academy, where they had worship and faith-building opportunities. The week was capped off with a celebratory concert.

As the teens worked at Turner’s house, they helped the Rochester woman solve a major problem. Following a stroke, her mother had begun to use a wheelchair and had come to live with Turner in a home that was not wheelchair-accessible.

"In order to get her up in the house, we both have to lift her," Turner said of herself and her sister.

The family had sought help from several agencies, but they learned that buying or renting a portable wheelchair ramp was out of their price range. The father of a friend mentioned the Catholic work camp was looking for ways to help local families. That’s how the group of teens wound up at her house, building a ramp out of wood.

"I recently got laid off, so it’s a godsend," Turner said.

In addition to working at private homes, teens helped organize clothes at Matthew’s Closet, a clothing ministry of St. Frances Xavier Cabrini Parish, and did maintenance and landscaping work at area parishes.

The group gathered for worship services in the evenings to connect the day’s service to their Catholic faith. Parent Duane McAllister, who was on the trip as a chaperone, said he found the camp’s worship to be powerful. For instance, during one session, teens laid hands on one person’s head and prayed, he said.

"They were saying prayers in silence, but the power of the spirit moving through the room was amazing and present," McAllister said.

Participant Keenan Griffin, 16, of Brookfield, Wis., a parishioner of St. John Vianney in Brookfield, Wis., said he has felt strong in his faith, but he was drawn to go on the mission trip — his first — because he wanted to get more connected to God.

He said the week of serving others helped his faith to grow stronger.

"It shows you how much people need our help in the world," he said.

Camper Erica Engstrand, 17, of Elm Grove, Wis., who attends St. Joseph’s Church in Wauwatosa, Wis., said she has been on several mission trips that have been so positive that she has found it disappointing to say goodbye to her new friends and go home.

"You help so many people and you have so much fun," Erica said. "It’s kind of like a win-win situation."