Telling the scriptural story of John the Baptist - Catholic Courier 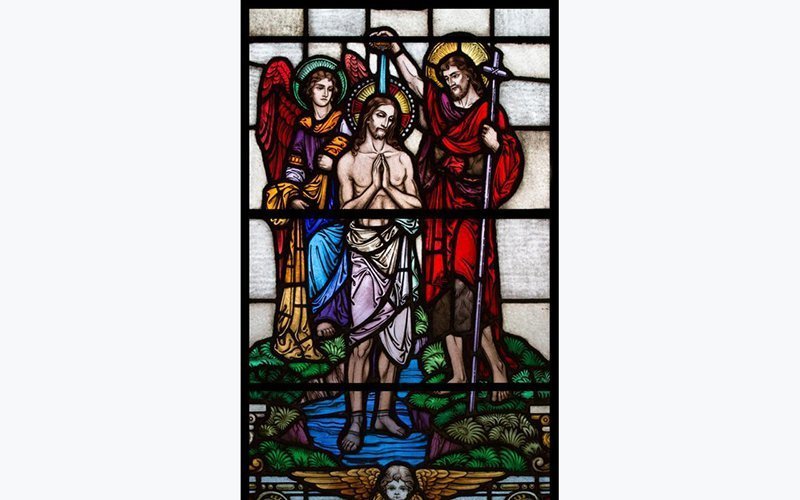 A depiction of St. John the Baptist baptizing Jesus at the Jordan River is seen in a stained-glass window at St. Paul Church in Wilmington, Del. (CNS photo by Octavio Duran)

Justice, peace and the call of our baptism

The story of John the Baptist really begins when he … But wait! His story is multifaceted in ways history often overlooked. How should it start?

Today it typically starts with John preaching to crowds who came to the Judean desert to hear him and receive his baptism. Perhaps, though, its starting point could be located in earlier times, when Israel was younger and its people began to anticipate the future work of someone like John.

A belief developed in Israel that somehow the rather ancient prophet Elijah would return one day to announce the coming of God’s kingdom, serving as a forerunner by helping prepare people for the arrival of the Messiah.

Belief that there is just one God came under threat in Israel during Elijah’s time. There would be good reason to esteem Elijah’s legacy as a prophet of the one, true God.

“I am sending to you Elijah the prophet, before the day of the Lord comes,” the Lord says in the Old Testament Book of Malachi (3:23).

Some speculate that people were inclined to think Elijah could return because they were not certain he actually died. Scripture declares that Elijah “went up to heaven in a whirlwind” (2 Kgs 2:11).

According to Scripture, Elijah dressed in “a hairy garment” and wore “a leather belt about his waist” (2 Kgs 1:8). Similarly, John the Baptist “wore clothing made of camel’s hair and had a leather belt around his waist” (Mt 3:4). Did this austere appearance of John remind many of Elijah, causing them to wonder if the moment of his return had arrived?

John would serve “in the spirit and power of Elijah,” Luke’s Gospel affirms (1:17).

To begin John the Baptist’s story, might it help to ask why the first Christians went to such lengths to keep the memory of him alive? Scripture mentions him numerous times.

Did the Gospel writers convey his story to future generations simply due to a role he had, the function fulfilled by announcing in the desert that the one coming after him, Jesus Christ, would be “mightier than I,” someone whose sandals he would not be worthy to carry (Mt 3:11), and by calling all to live justly (Lk 3:10-14)?

That was a role of great distinction. Still, it seems that for early Christians John was remarkable both in what he did and who he was at a key time in their history.

Some today may know John the Baptist best for his violent murder, depicted in films and opera. Herod’s wife Herodias bore a grudge against John for considering the king’s marriage to her unlawful. Herod acceded one night to her wish that he have John beheaded.

Her wish was communicated to Herod by Herodias’ daughter, infamously known to history as Salome. Scripture says John’s head was brought to the girl on a platter (Mt 14:6-11).

But surely it is less with his murder than his birth that John the Baptist’s story should begin. In welcoming their child’s birth, his parents, Elizabeth and Zechariah, must have sensed that his future promised something wonderful. John was touched by God from the start.

The announcement of John’s coming birth appears at the beginning of Luke’s Gospel. And guess who makes the announcement? It is the angel Gabriel, never to be forgotten by Christians because he bore the news to Mary that she would become, most surprisingly, the mother of Jesus.

The angel tells Mary in Luke’s Gospel that Jesus “will be great and will be called Son of the Most High” (Lk 1:30-33). Notably, Luke’s Gospel says that Elizabeth and Mary were relatives (1:36).

Gabriel announced John’s coming birth to Zechariah. He and Elizabeth, an older couple, had no children. They hardly could imagine this news.

“Many will rejoice” over this child’s birth, said Gabriel. He “will be filled with the Holy Spirit even from his mother’s womb, and he will turn many of the children of Israel to the Lord” (Lk 1:15-16).

It must have been no small thing for Luke to speak of the Spirit’s presence in John the Baptist’s life and work. Luke also is recognized as the author of a second New Testament volume, the Acts of the Apostles. Its opening pages describe how the Spirit, “like a strong driving wind” (2:2), came to the earliest Christians on the first Pentecost.

The Spirit is viewed in Acts as powerful, a unifying force enabling the many gathered in Jerusalem at that moment, from different areas, to understand each other, even though they did not know each other’s languages.

To be filled with the Spirit was, for Luke, an amazing gift of God.

In the Gospel of Matthew (3:3), words of the Hebrew prophet Isaiah are applied to John the Baptist directly, clarifying why today he is considered a model for Christians during the Advent weeks preceding Christmas.

Thus, to hear him is to hear the “voice of one crying out in the desert, ‘Prepare the way of the Lord.'”