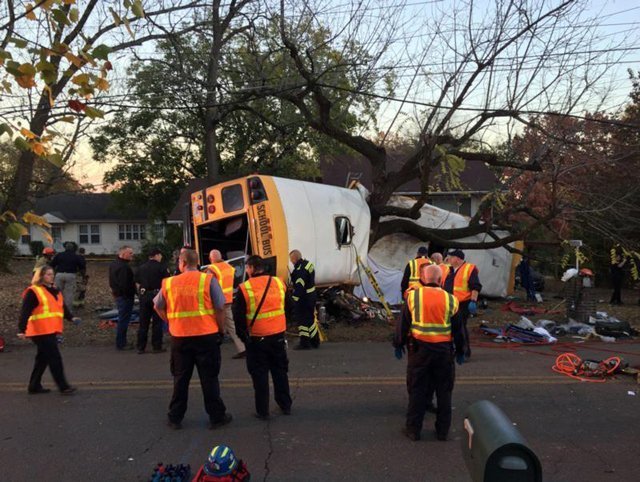 Rescue officials are seen at the site of a school bus crash involving several fatalities in Chattanooga, Tenn., Nov. 21.
By Catholic News Service
CHATTANOOGA, Tenn. (CNS) — After a horrific school bus crash in Chattanooga left at least six children dead Nov. 21, Knoxville Bishop Richard F. Stika offered his prayers and said priests in the diocese would be available to provide pastoral help.
"My prayers tonight are with the victims and families of the terrible bus crash in Chattanooga," he said in a tweet. "I remain in contact with our Catholic priests in southeast Tennessee and we will make ourselves available to anyone in need."
The bus driver, Johnthony Walker, 24, faced five counts of vehicular homicide, reckless endangerment and reckless driving.
Law enforcement said that based on the physical evidence at the crash scene and what witnesses saw, Walker apparently was driving the bus well above the 30 mph speed posted for the area.
His arrest warrant said: "Walker lost control of the bus and swerved off of the roadway to the right, striking an elevated driveway and mailbox, swerved to the left and began to overturn, striking a telephone pole and a tree."
News accounts said 35 students in kindergarten through fifth-grade from Woodmore Elementary School were on the bus when it slammed into a tree and came apart. Six children were killed and several others were injured.
"Earlier this afternoon, our community experienced a horrible tragedy when a school bus crashed … claiming the lives of multiple children and injuring others," Hamilton County Sheriff Jim Hammond said in a statement:
"We are deeply saddened for the family and loved ones who lost these precious little ones today," he said.
"As the agency responsible for the School Resource Officer program in Hamilton County, my staff and I are deeply saddened by the loss of these young children," Hammond added. "There are several families in our county that will not have their loved ones come home tonight and we as a community will feel the sadness and hurt from this event for a very long time to come."
Copyright © 2022 Catholic News Service, Inc. All rights reserved. Linking is encouraged, but republishing or redistributing, including by framing or similar means, without the publisher's prior written permission is prohibited.