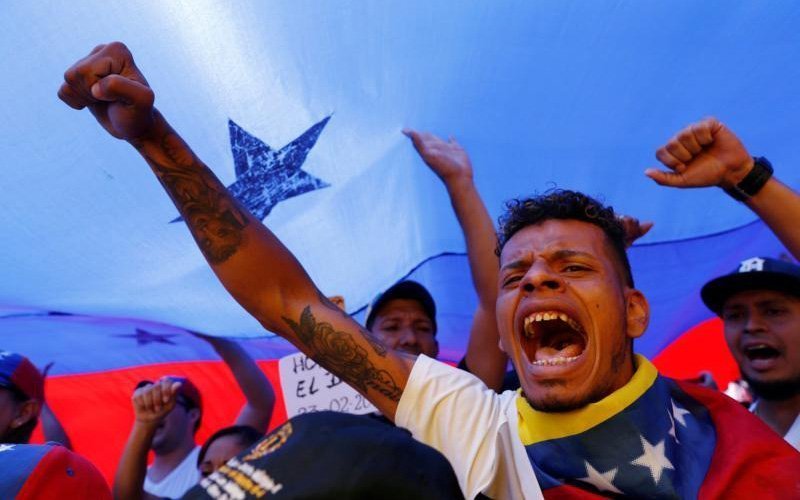 SAO PAULO (CNS) — Tensions were high along Venezuela’s borders after clashes protesting Venezuelan President Nicolas Maduro’s decision not to allow humanitarian aid into the country for millions of vulnerable citizens.

The situation was complicated by politics: Opposition leader Juan Guaido, who has declared himself interim president and has the backing of 50 governments around the world, has been supporting the influx of aid, including aid staged at the Colombia-Venezuela border by the United States.

Presidents and vice presidents of 14 countries, including U.S. Vice President Mike Pence, were meeting in Bogota, Colombia, Feb. 25, to discuss the Venezuelan crisis.

At the border crossing in Pacaraima, Brazil, two trucks carrying humanitarian aid crossed into Venezuela Feb. 23, but were stopped by the Venezuelan military. On Feb. 24, the Brazilian government issued a statement saying the two trucks had returned to Pacaraima, unable to deliver the aid. The Brazilian government, however, pledged to try the crossing once again as soon as Venezuela’s “diplomatic situation” is resolved.

For the past few years, church groups — including Venezuela’s bishops — have urged Maduro to let humanitarian aid into the country to relieve the suffering of Venezuelans facing food and medicine shortages, hyperinflation and crime. Maduro argues the aid would be used to meddle in the country’s affairs.

On Feb. 23, Guaido urged members of the Venezuelan military to join him in the fight against Maduro’s “dictatorship,” the Associated Press reported. Foreign media reported about 60 soldiers deserted, and churches in Cucuta, Colombia, offered sanctuary to some of them.

But Scalabrinian Sister Valdiza Carvalho, who works for the Brazilian bishops’ department for migrants, told Catholic News Service Feb. 22 the Brazilian government efforts to send aid across the border to Venezuelans faced many roadblocks — literally.

“Along the Venezuela-Colombia border there are a lot of Venezuelan towns, and aid from there may be plausible, but from Pacaraima (Brazil) I don’t think it will work,” she said.

First, she said, the city of Santa Elena, Venezuela, near Pacaraima, is just a stopover to the thousands of Venezuelans crossing the border.

To get the aid to these towns, the trucks with humanitarian aid would have to pass “many, many military checkpoints” controlled by Maduro supporters, said Sister Carvalho.

“To successfully get this food and medicine to the people who need it, we would need an international agreement with the Maduro government for the safe passage of the goods; without it I don’t think it (aid) will reach them,” she said.

Sister Carvalho told CNS she had spoken to her counterparts in Santa Elena, “and they say that people arriving from other parts of Venezuela to cross the border are insecure, they don’t know what to do now.”

She said the church in Santa Elena is also very concerned about the Pemon indigenous community that lives near the border. The Venezuelans told Sister Carvalho that the indigenous are very concerned with the increased number of Venezuelan military personnel on their lands.

The nun said that, in February, with the increased political tension in Venezuela, the flow of people coming and going across the border has surged.

“Yesterday we had about 700 people coming across the border,” she said, adding that most do not stay in Pacaraima or even Roraima state.

“There are many who come across the border to purchase food and medicine to take back to Venezuela. Others already have a plane or bus ticket from Boa Vista (capital of Roraima) to other states in Brazil and even Argentina,” she said.