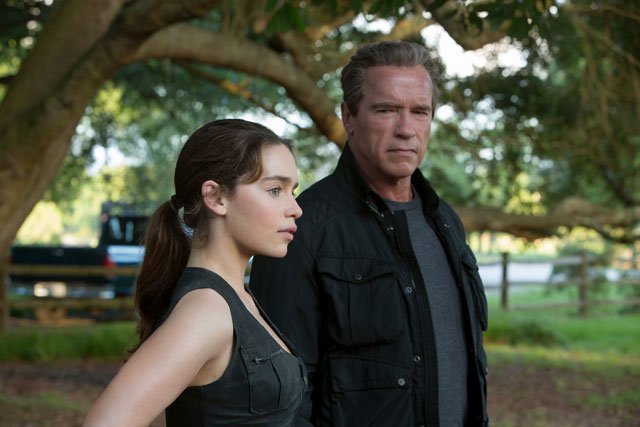 Emilia Clarke and Arnold Schwarzenegger star in a scene from the movie "Terminator: Genisys." The Catholic News Service classification is A-III -- adults. The Motion Picture Association of America rating is PG-13 -- parents strongly cautioned. Some mater ial may be inappropriate for children under 13.
By John Mulderig
Catholic News Service
NEW YORK (CNS) — Any movie plot that hangs on the ability of an adult character to journey into the past to give vital advice to himself as a child is bound to register as somewhat convoluted.
Add to that the further wrinkle that the film in question is the fifth installment in a franchise so antique that a sequence set in the year of the series’ first release seems like a visit to an alien culture, and viewers can be forgiven for feeling a bit at sea.
Still, though they may be ruminated on at some length in the dialogue, the riddles of time travel are not really the point of "Terminator: Genisys" (Paramount). The primary purpose of this easily forgotten latest chapter in a sci-fi action narrative that dates back to 1984’s "The Terminator" is, rather, to empower its cast to blow things up, fire off weapons and drive with abandon.
There is, accordingly, mayhem aplenty, both before and after that inevitable moment when the original Terminator himself, Arnold Schwarzenegger, assures us, yet again, that he’ll be back.
What’s behind all this stylized ruckus? The post-apocalyptic conflict between murderous machines and embattled humanity in the world of 2029, that’s what.
The prospects of those fighting on the flesh-and-blood side in this drawn-out battle are looking up, thanks to the work of their Messiah-like leader, John Connor (Jason Clarke). Just as he’s about to achieve a definitive victory, however, John faces a unique threat.
His adversaries, we learn, have used a time machine to send a cyborg (Byung-hun Lee) into the past to eliminate John’s mother, Sarah (Emilia Clarke), before she can give birth to him. Not to be outdone, John, in turn, dispatches Kyle Reese (Jai Courtney), his most trusted lieutenant, to follow the assassin back in time and protect Sarah.
Once safely arrived in the Reagan era, however, Kyle is confused to find that Sarah is already being shielded by another chronology-defying robot (Schwarzenegger) who seems to be fighting on the wrong side.
Kyle’s bewilderment is likely to be shared by those whose memory of the mid-1980s is not sufficiently detailed to explain why or how the new, good Arnold winds up battling the bad Arnold of 30 years ago. And then there’s grown-up Reece’s counsel-bearing encounter with little Reece.
Given the obvious prima-facie appeal of director Alan Taylor’s shoot’em-up to youthful viewers, however, the question confronting parents is much more straightforward.
Despite its relentlessness, the destruction on view carries with it little bloodshed. And the fact that time machine passengers can only be transported in the buff also is treated more as an occasion for smirking jokes than for visual exploitation. Together with the relative absence of obscenity in the dialogue, such restraint may lead at least some parents to consider "Terminator: Genisys" acceptable for mature teens.
The film contains pervasive action violence with minimal gore, several scenes of partial nudity, a few uses of profanity, at least one rough term and occasional crude and crass language. The Catholic News Service classification is A-III — adults. The Motion Picture Association of America rating is PG-13 — parents strongly cautioned. Some material may be inappropriate for children under 13.
– – –
Mulderig is on the staff of Catholic News Service.
Copyright © 2022 Catholic News Service, Inc. All rights reserved. Linking is encouraged, but republishing or redistributing, including by framing or similar means, without the publisher's prior written permission is prohibited.