Texas bishops pray for all affected by wildfires - Catholic Courier 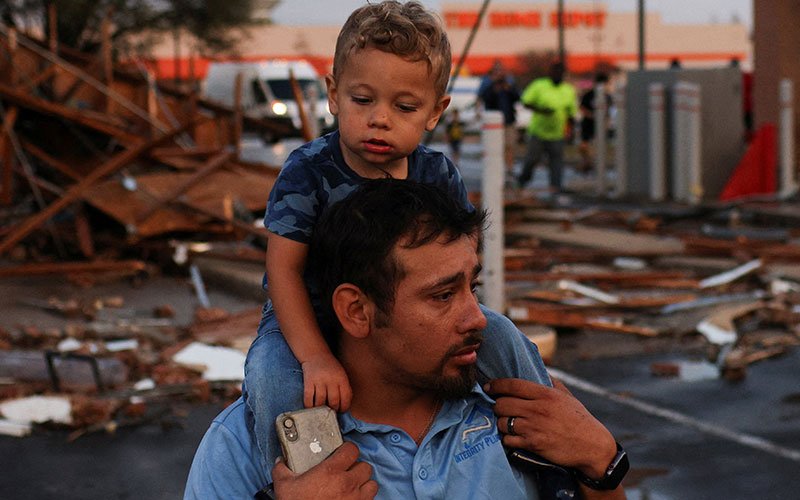 Arturo Ortega and his son, Kaysen Ortega, 2, survey the damage to a shopping center after a tornado touched down in Round Rock, Texas, March 21, 2022. (CNS photo by Tamir Kalifa/ Reuters)

AUSTIN, Texas (CNS) — The Texas Catholic Conference of Bishops said they were grateful for the first responders fighting wildfires raging across the state and offered prayers for them and all who have been affected by the natural disaster.

“We pray for the first responders and for the community members, as they work together to salvage homes, businesses and lives,” the Texas bishops said in a statement released March 21. “We are grateful for their dedication and their generosity toward their neighbors.”

“Let us also remember those who have been harmed physically and materially by the fires, especially the deceased,” they added. “May they find comfort in our prayers and in the mercy and charity shown to them.”

The Texas A&M Forest Service said March 21 that 178 wildfires had burned more than 108,000 acres across the state since the wildfires started Feb. 23. Gov. Greg Abbott issued a disaster declaration March 17 for 11 Texas counties to help them in the aftermath of the fires; he said more counties could be added.

The largest fire, named the Eastland Complex, has engulfed the town of Carbon and more than 54,000 acres, claiming at least one life and leaving many families homeless. The complex actually consists of seven fires and as of March 21 was 60% contained, according to a CNN story.

Hood County is part of the Dallas-Fort Worth-Arlington metro area. Erath County, to its west, is where two of North America’s largest renewable natural gas plants are located.

In addition to the destruction to homes caused by the wildfires, an estimated 1,000 homes in Texas were damaged by two tornadoes that were part of a storm system consisting of 25 tornadoes that hit Texas late March 21.

The following day, the system spawned more twisters as the storm pushed east. What was described in media reports as a “large and extremely dangerous tornado” hit the New Orleans area the night of March 22, creating widespread damage and causing at least one death.