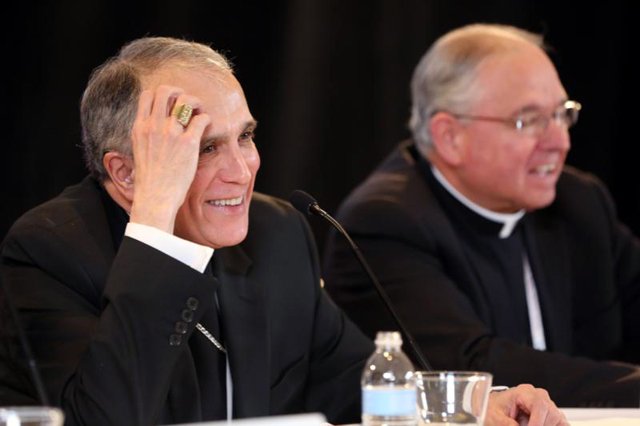 Cardinal Daniel N. DiNardo of Galveston-Houston addresses a news conference Nov. 15 at the fall general assembly of the U.S. Conference of Catholic Bishops in Baltimore. The cardinal was elected USCCB president that morning. Seated to his left is Archbishop Jose H. Gomez of Los Angeles, who was elected USCCB vice president.

BALTIMORE (CNS) — Cardinal Daniel N. DiNardo of Galveston-Houston was elected president of the U.S. bishops’ conference Nov. 15 for a three-year term to begin at the conclusion of the bishops’ annual fall general assembly in Baltimore.
Cardinal DiNardo collected a majority of votes on the first ballot of voting during the second day of the bishops’ public session. Based on the number of bishops voting, 104 votes were needed for election, and Cardinal DiNardo — the current vice president of the U.S. Conference of Catholic Bishops — received 113.
He will succeed Archbishop Joseph E. Kurtz of Louisville, Kentucky, whose three-year term as president concludes at the end of the meeting.
Elected vice president was Archbishop Jose H. Gomez of Los Angeles. By virtue of his election, Archbishop Gomez will not take over as chairman of the bishops’ Committee on Migration. He was elected last year as chairman-elect of the committee and was to succeed the current outgoing chairman, Auxiliary Bishop Eusebio L. Elizondo of Seattle, at the end of this year’s general assembly.
A lunchtime meeting was scheduled for the committee to advance two names for chairman to be voted on by the full body of bishops.
Archbishop Gomez was elected vice president on the third ballot.
Under rules established by the USCCB, the names of 10 bishops who are willing to be nominated for the USCCB presidency are presented for voting. After a president is elected, the remaining nine are then considered for the vice presidency.
If no candidate of the nine has received a simple majority after two ballots, the third ballot features only the two top vote-getters in the second round. Archbishop Gomez was elected over Archbishop Gregory M. Aymond of New Orleans.
The other nominees were, in alphabetical order, Archbishops Charles J. Chaput of Philadelphia and Paul S. Coakley of Oklahoma City; Bishop Daniel E. Flores of Brownsville, Texas, the only non-archbishop among the original 10; and Archbishops William E. Lori of Baltimore, Allen H. Vigneron of Detroit, Thomas G. Wenski of Miami, and John C. Wester of Santa Fe, New Mexico.
The bishops also voted for chairmen-elect of five standing committees and three representatives for the board of Catholic Relief Services, the U.S. bishops’ overseas relief and development agency.
The standing committees include Canonical Affairs and Church Governance; Ecumenical and Interreligious Affairs; Evangelization and Catechesis; International Justice and Peace; and Protection of Children and Young People.
The chairmen-elect each will begin a three-year term as chairmen at the end of the bishops’ fall general assembly in 2017:
— Committee on Canonical Affairs and Church Governance: Bishop Robert P. Deeley of Portland, Maine, elected over Bishop David M. Malloy of Rockford, Illinois, 111 to 89.
— Committee on Ecumenical and Interreligious Affairs: Bishop Joseph C. Bambera of Scranton, Pennsylvania, elected over Bishop Michael C. Barber of Oakland, California, 115 to 90.
— Committee on Evangelization and Catechesis: Auxiliary Bishop Robert E. Barron of Los Angeles elected over Bishop Frank J. Caggiano of Bridgeport, Connecticut, 122 to 90.
— Committee on International Justice and Peace: Archbishop Timothy P. Broglio of the U.S. Archdiocese for the Military Services elected over Bishop Robert W. McElroy of San Diego, 127 to 88.
— Committee on Protection of Children and Young People: Bishop Timothy L. Doherty of Lafayette, Indiana, elected over Bishop Joseph J. Tyson of Yakima, Washington, 128 to 86.
Also several chairmen-elect chosen last year will become committee chairmen at the end of this year’s assembly and will serve three-year terms:
— Divine Worship: Archbishop Wilton D. Gregory of Atlanta.
— Domestic Justice and Human Development: Bishop Frank J. Dewane of Venice, Florida.
— Clergy, Consecrated Life and Vocations: Cardinal-elect Joseph W. Tobin of Indianapolis, who recently was appointed archbishop of Newark, New Jersey.
— Catholic Education: Bishop George V. Murry of Youngstown, Ohio.
— Laity, Marriage, Family Life and Youth: Archbishop Chaput.
A vote also was taken for three seats on the board of Catholic Relief Services. Elected were Archbishop Coakley, who ends his term as president of the board but remained eligible to continue serving; Archbishop Jerome E. Listecki of Milwaukee; and Bishop Gregory L. Parkes of Pensacola-Tallahassee, Florida.
– – –
Contributing to this story was Dennis Sadowski. Follow Pattison and Sadowski on Twitter: @MeMarkPattison and @DennisSadowski.
Copyright © 2022 Catholic News Service, Inc. All rights reserved. Linking is encouraged, but republishing or redistributing, including by framing or similar means, without the publisher's prior written permission is prohibited.