Texas governor: Response to prayer after accident made him stronger - Catholic Courier 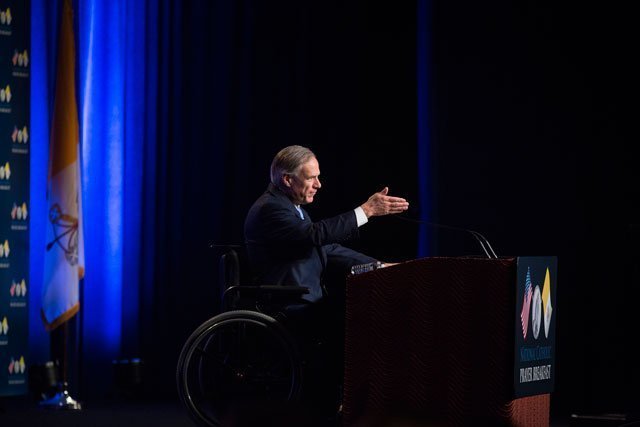 WASHINGTON (CNS) — Texas Gov. Greg Abbott has not always lived life in a wheelchair. He was on his morning jog 31 years ago when a falling tree broke his spinal cord, leaving him partially paralyzed.

Abbott, a Catholic, noted at the National Catholic Prayer Breakfast, held May 7 in Washington, there are times when "our prayers are answered differently than the way we expect."

He said he can recall, "I spent months praying and hoping for the best possible outcome" after the accident. God, instead, "responded by giving me challenges that made me even stronger."

Abbott told the audience at a Washington hotel ballroom, "In hindsight, I am tremendously thankful that God did not grant me my wish," adding, "If you had seen what I had gone through, you would never again question the Lord."

As he had in the period following his accident, "have you ever noticed how our prayers increase in time of great need?" asked Abbott, who had been Texas’ attorney general for 12 years before becoming governor in January.

He said the United States is in such a time right now. He told of two challenges to religious liberty that Texas successfully fended off in the courts. One would have removed a monument to the Ten Commandments on government property; another would have deleted the words "one nation under God" from the Pledge of Allegiance.

Abbott outlined three such challenges in the courts today: the Little Sisters of the Poor’s lawsuit challenging the federal Department of Health and Human Services’ contraceptive mandate under the Affordable Care Act; what he called "the never-ending battle to defend the unborn"; and the legal challenge to "marriage defined by God."

The Bible holds the answer to such issues, according to Abbott. "God told us what we need in this world are righteous leaders," he said. "If we close the door to the Lord, we can do nothing."

Bishop Richard J. Malone of Buffalo, New York, who also spoke at the breakfast, took note of "the most recent and dramatic challenges of this crisis facing our culture" in the courts today, although he focused on same-sex marriage.

He lamented what might happen to children "when creation becomes subject to human domination instead of God’s stewardship."

Bishop Malone, chairman of the U.S. bishops’ Committee on Marriage, Family Life, Women and Youth, added, "The sacrament of marriage does not replace or supplant the normal instrument of marriage, but simply fulfills it."

The church, he said, "recognizes the sacrament of a normal marriage bond and insists that the human law do the same."

"The call of St. John Paul II for families to ‘become what you are’" — repeating the pope’s quote for emphasis — "is still relevant today," Bishop Malone said.

"Education and ongoing formation are urgently needed" in the national marriage debate, he added.

Bishop Malone quoted remarks from Archbishop Joseph E. Kurtz of Louisville, Kentucky, president of the U.S. Conference of Catholic Bishops, made at the recent March for Marriage when he said, "The building of a culture of marriage will take patience, persistence and courage." Bishop Malone also asked or "an outpouring of the Holy Spirit" to aid in this work.

The National Catholic Prayer Breakfast is in its 12th year. It is generally held on the first Thursday in May, which is the National Day of Prayer, a date set in 1988 by Congress, although Congress had authorized an annual national day of prayer in 1952.

In a proclamation marking the day, President Barack Obama said, "As we join together in fellowship, we seek to see our own reflection in the struggle of others, to be our brothers’ and sisters’ keepers, and to keep faith — in one another, in the promise of our nation, and in the Almighty."