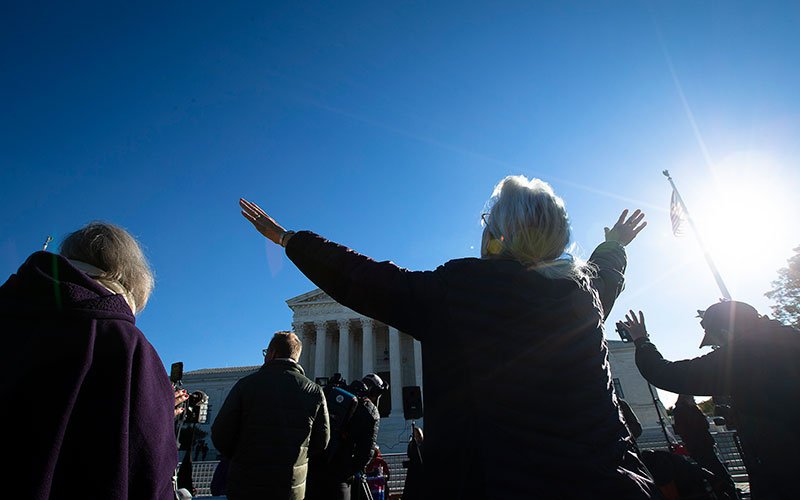 Pro-life advocates pray near the U.S. Supreme Court in Washington Nov. 1, 2021, during oral arguments in a challenge to a Texas law that bans abortion after six weeks. The high court sent the law back to the Texas Supreme Court, which ruled March 11, 2022, that abortion providers cannot challenge the state over enforcement of a law that allows private citizens to sue providers. (CNS photo by Tyler Orsburn)

WASHINGTON (CNS) — In a March 11 ruling, the Texas Supreme Court ended a challenge by abortion clinics to a state law that bans most abortions in Texas.

The court ruled that state officials, including licensing officials, do not have the ability to enforce the abortion law, which bans most abortions after six weeks of pregnancy, so clinics cannot sue them.

Under the law, private citizens can sue abortion providers for abortions that take place and could be entitled to $10,000 if successful.

“With this ruling, the sliver of this case that we were left with is gone,” said Nancy Northup, president and CEO of the Center for Reproductive Rights, in a March 11 statement. Her organization led the challenge against the Texas law.

Kimberlyn Schwartz, director of media and communication for Texas Right to Life, called the ruling “a big victory for the life-saving Texas Heartbeat Act,” adding in a statement that the group has “said from the beginning that the abortionists’ lawsuit should be dismissed.”

Texas Attorney General Ken Paxton similarly called the ruling a “major victory,” and said on Twitter that the state’s law “remains fully in effect” and the lawsuit against the state is “essentially finished.”

In January, the 5th U.S. Circuit Court of Appeals asked the state’s Supreme Court to review a key question examining if medical licensing officials named in the lawsuit are responsible for enforcing the abortion law and can be sued by opponents of the law seeking an injunction on it.

In court arguments, abortion providers said state agencies regulating doctors, nurses and pharmacists have an enforcement role that qualifies them as targets for their lawsuit.

But lawyers for the state said the law specifies that only private citizens can enforce the law through civil litigation.

The state’s Supreme Court justices, siding with the state, said the law includes “emphatic, unambiguous, and repeated provisions” explaining that that civil litigation is the only means for enforcing the law.

The Texas abortion law, signed by Republican Gov. Greg Abbott last May, went into effect last September and has faced multiple legal challenges since then.

In January, when the state’s highest court agreed to hear the case, Texas Right to Life said this was “appropriate because the only defendants left in the case are state agencies.”

The appeals court ruling said the state should examine if the Texas attorney general, the state’s medical board and other licensing officials can take action to enforce violations of the abortion law.

The U.S. Supreme Court allowed the challenge to the abortion law to continue in lower courts if it focused on the role Texas medical licensing officials play in the law’s enforcement.

When the nation’s high court first ruled against blocking the Texas abortion law last September, the Texas Catholic Conference, the public policy arm of the state’s Catholic bishops, said this was the first time since Roe v. Wade that the Supreme Court “has allowed a pro-life law to remain while litigation proceeds in lower courts.”