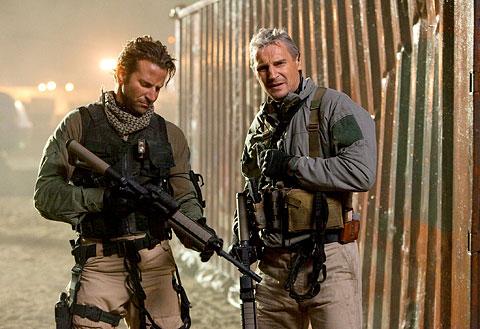 NEW YORK (CNS) — Pretty much everything blows up in "The A-Team" (Fox). Blows up real well, too!

This noisy, unapologetically cheesy and somehow engrossing film based on the 1980s TV series has more stunts than dialogue, a stark plot limned in the thickest possible strokes, and is merrily untrammeled by logic, military discipline or the laws of physics. Aircraft, military hardware and motor vehicles careen about as if in a video game.

That’s the fun of it. Truth and justice will prevail, so switch off your mind and you can enjoy the ride.

In this updated incarnation, the four men are members of an elite Army Ranger team specializing in covert operations. In Iraq, they’re sent to recover counterfeit plates and money put out by Saddam Hussein loyalists to disrupt the economy. Lynch (Patrick Wilson), a jealous CIA officer, sabotages the conclusion, resulting in the death of the general (Gerald McRaney) who assigned the mission.

The four are convicted of the death and sent to military prisons, but in virtually no time at all, another CIA officer helps Smith escape, and he, in turn assists the others in a series of — well, unbelievable, but by this point, you’ll stop caring — escapes so they can nab Lynch and clear their names.

On it goes, or rather — explodes — to a rapid-fire, good-natured conclusion.

The film contains some fleeting crass and crude language, most of it before the opening credits are over, a brief reference to premarital sex, and abundant explosions and gunfire. But it’s really all about the stunts, making this acceptable for older adolescents. The Catholic News Service classification is A-II — adults and adolescents. The Motion Picture Association of America rating is PG-13 — parents strongly cautioned. Some material may be inappropriate for children under 13.