The Adventures of Tintin - Catholic Courier 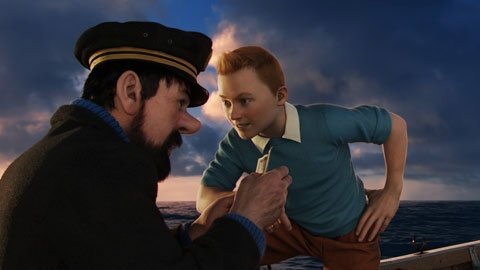 NEW YORK (CNS) — "Great snakes!" The characteristic exclamation of the titular hero of "The Adventures of Tintin" (Paramount/Columbia) may also be the cry of surprised audience members taken aback both by the high-quality animation, and the exhilarating plot, of what might otherwise have turned out to be yet another chapter in mediocre translations from page to reel. Parents as well will nod appreciatively at the messages of self-sacrifice, friendship and determination on offer.

This is not the first time the characters drawn by Belgian illustrator Herge (real name Georges Remi), and first published in the Belgian Catholic newspaper "Le Vingtieme Siecle" in 1929, have been featured in motion — a highly successful TV series spawned from the books ran on HBO during the early 1990’s. But it is the first time the curiously coiffed reporter known as Tintin (voiced by Jamie Bell) and his terrier sidekick Snowy have made it to the big screen.

Directed by Steven Spielberg from a script by Steven Moffat, Edgar Wright and Joe Cornish — and co-produced by the illustrious Peter Jackson of "Lord of the Rings" fame — the film manages to combine an original vision with faithfulness to the enormously popular source material.

Our chipper junior journalist finds himself drawn into a centuries-old mystery via the purchase of a hobby model ship, and consequently marked for elimination by deliciously evil villain Ivan Ivanovitch Sakharine (voice of Daniel Craig). Aiding Tintin, as best he can, is excessively tippling Scottish seaman Captain Haddock (voiced by Andy Serkis). A kindly lost soul searching for redemption at the bottom of a whisky bottle, Haddock’s ancestors and family destiny are bound up with the miniature vessel.

Haddock’s quest for renewal is a central and consistent theme, and the film highlights the vital role of companionship in overcoming one’s individual weaknesses. The need for fortitude in the face of difficulty is also exemplified. These lessons will likely please both parents and viewers of faith.

The project is ambitious, and makes the most of the latest in performance-capture technology — a technique that transposes the facial and bodily movements of the actors onto their animated counterparts — as well as top-flight 3-D rendering, Mix in a thrilling score by cinema maestro John Williams, and the result is a sumptuous visual and aural feast that takes the viewer on an action-packed adventure from Tintin’s humble home in a retro (yet timeless) Belgium to the beauteous deserts of North Africa.

There are a few instances of fist fighting and nongraphic gunplay. And in one scene a ship’s crew are bound and made to walk the plank. But the movie is, by and large, a family-friendly affair which will not only afford vigilant moms and dads a chance to relax, but the opportunity to be entertained as well.

The film contains occasional stylized violence. The Catholic News Service classification is A-I — general patronage. The Motion Picture Association of America rating is PG — parental guidance suggested. Some material may not be suitable for children.