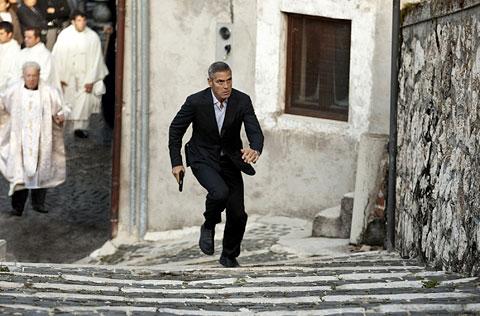 NEW YORK (CNS) — George Clooney is in a very bad mood in "The American" (Focus), playing a hired assassin who has soured on his profession and contemplates a better life. While this should be a gripping, fast-paced thriller worthy of the Jason Bourne franchise, the title character’s depression and sheer lethargy keep the film’s gears firmly in park, leaving the audience bewildered and disappointed.

Additionally, although the serious intent of the filmmakers is clear, scenes of graphic sexuality suggest a very restricted audience, while the treatment of Christian morality — via the presence of a far from exemplary, but nonetheless sympathetic Catholic priest — is unsatisfying and insubstantial.

In a much darker role than he usually plays, Clooney is Jack, a loner who is the consummate professional when it comes to killing people. A job in Sweden goes terribly wrong, and Jack flees to Italy, where his employer sets him up in a safe house in a picturesque mountaintop village in Abruzzo. Here, Jack, the lone Yankee and a fish-out-of-water, begins to heal, tasting the pleasures of a "normal" life, which (for him) includes plenty of time at the local brothel.

Predictably, Jack falls for Clara (Violante Placido), a prostitute with a heart of gold, and he begins to dream of living happily ever after with her. Not so fast: There’s one more job for Jack to carry out, and he reverts to form, making high-tech rifles on his kitchen table for mysterious lady agent Mathilde (Thekla Reuten).

There are big decisions to be made, and Jack wanders aimlessly up and down the cobblestoned streets, brooding about life and destiny. He is befriended by the local clergyman, Father Benedetto (Paolo Bonacelli), who senses Jack’s torment and offers friendship, advice and lots of vino.

The treatment of Catholicism in "The American" is respectful but not very deep. Father Benedetto pops in and out as the film’s moral compass, wagging his finger, appealing to Jack’s conscience (what’s left of it). "A man can be reached if he has God in his heart," Father Benedetto says.

The priest is revealed to be a flawed man himself, but one who has been reconciled to God and redeemed — offering hope even to a professional killer.

Ultimately, "The American" isn’t very interested in bigger issues such as salvation. Jack will not come clean, so we never learn the back story of how this seemingly nice guy fell from grace. He conceals his sins from everyone, even Clara, who calls him Edward and thinks he is a photographer who likes butterflies. They make plans to run away, but Jack discovers it’s hard to leave the past behind.

Based on the novel "A Very Private Gentleman" by Martin Booth and directed by Anton Corbijn ("Control"), "The American" scores high marks for its cinematography and art-house look. Multilayered villages are the perfect labyrinths for games of cat and mouse. Like Francis Ford Coppola in "The Godfather," Corbijn juxtaposes good and evil to dramatic effect, staging a solemn religious procession through the village streets as the backdrop to the film’s final battle.