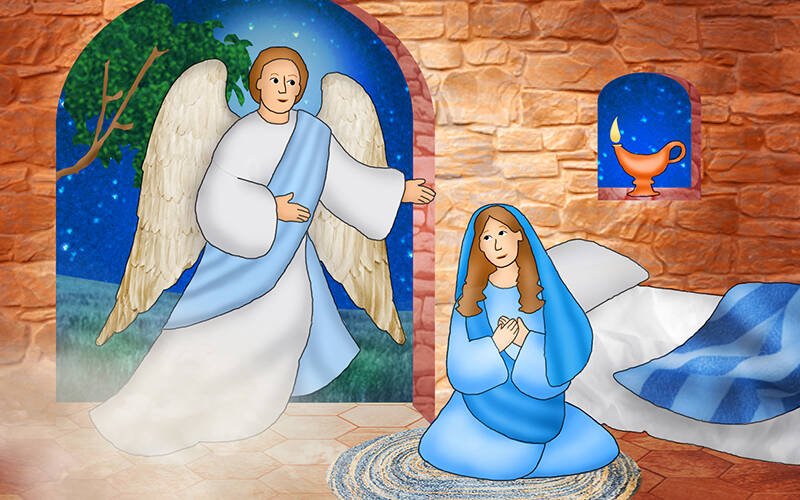 One day, God sent the angel Gabriel on a mission.

He wanted Gabriel to go to the town of Nazareth in Galilee and deliver a very important message to a young girl who lived there.

The girl’s name was Mary. She was a virgin who was betrothed to a man named Joseph, who was of the house of King David.

“Hail, full of grace! The Lord is with you,” Gabriel said when he visited Mary.

When Mary heard Gabriel’s greeting, she was troubled and wondered what it meant.

Gabriel knew what she was thinking.

“Do not be afraid, Mary,” he assured her, “for you have found favor with God.”

Gabriel then shared with her the message God wanted him to relay.

“Behold, you will conceive in your womb and bear a son, and you shall name him Jesus,” the angel announced. “He will be great and will be called Son of the Most High, and the Lord God will give him the throne of David his father, and he will rule over the house of Jacob forever, and of his Kingdom there will be no end.”

Mary was confused. She asked Gabriel how she could have a baby when she and Joseph had not yet begun their married life together.

“The Holy Spirit will come upon you, and the power of the Most High will overshadow you. Therefore, the child to be born will be called holy, the Son of God,” Gabriel explained.

“And behold, Elizabeth, your relative, has also conceived a son in her old age, and this is the sixth month for her who was called barren; for nothing will be impossible for God,” he said.

“Behold, I am the handmaid of the Lord,” Mary said. “May it be done to me according to your word.”

After Mary had spoken, Gabriel left.

Not long after, Mary traveled to Judah to visit Elizabeth.

When Mary entered the house of Elizabeth and her husband, Zechariah, she called out a greeting.

When Elizabeth heard it, the baby in her womb leapt for joy, and she was filled with the Holy Spirit.

“Most blessed are you among women, and blessed is the fruit of your womb,” Elizabeth said.

1. Whom did Gabriel visit?

2. What message did Gabriel deliver?

When has someone told you some good or exciting news?

Mary was not the only person whom an angel visited to discuss Jesus’ birth.

In Matthew 1:18, we read that Mary’s husband, Joseph, learned that Mary was with child before they began living together as husband and wife.

Joseph was a righteous man, so he planned to divorce her quietly so he would not bring her shame.

One night, Joseph had a dream in which an angel of God spoke to him.

“Joseph, son of David, do not be afraid to take Mary your wife into your home. For it is through the Holy Spirit that this child has been conceived in her,” the angel explained. “She will bear a son and you are to name him Jesus, because he will save his people from their sins.”

All this was taking place to fulfill what God had said through the prophet Isaiah: “Behold, the virgin shall be with child and bear a son, and they shall name him Emmanuel,” which means “God is with us.”

When Joseph woke up, he did what the angel had said and took Mary into his home.

Mary and Joseph were in Bethlehem for a census when it came time for Mary have her baby. And when he was born, Mary and Joseph named the baby Jesus, as the angel had said.

St. Anastasia’s history is a mystery.

Some say she was martyred in a Roman province in Central Europe during the Christian persecution that took place during the reign of Emperor Diocletian (284-305).

Others say she was a Roman matron who helped the Christian community at Aquileia, Italy.

Despite her mysterious background, her name was included in the Roman Canon of the Mass in the fifth century. And in accord with an ancient custom, she is commemorated during the second Mass on Christmas Day, Dec. 25.

Answers: is, womb, the, blessed, fruit, your, of

Blessed is the fruit of your womb.