The angel tells of John the Baptist's birth - Catholic Courier 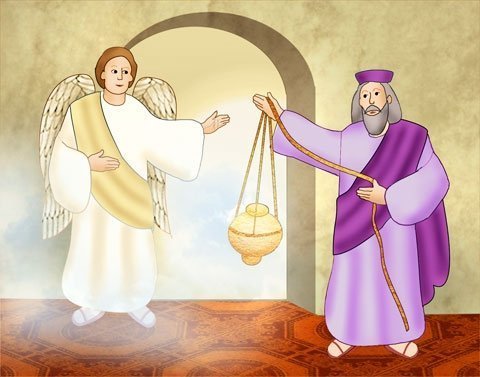 The angel tells of John the Baptist’s birth

The angel tells of John the Baptist’s birth

Zechariah, a priest, and his wife, Elizabeth, who was descended from Aaron, the brother of Moses, obeyed all of the Lord’s commandments. They often prayed that one day the Lord would bless them with children. On a day when it was Zechariah’s turn to burn incense in the sanctuary, an angel appeared in front of him. The congregation and the other priests were outside the sanctuary praying, so no one but Zechariah saw the angel. And he was frightened.

The angel said, “Do not be afraid, Zechariah, because your prayer has been heard. Your wife Elizabeth will bear you a son, and you shall name him John. And you will have joy and gladness, and many will rejoice at his birth, for he will be great in the sight of (the) Lord. … He will go before him in the spirit and power of Elijah to turn the hearts of the fathers toward children and the disobedient to the understanding of the righteous, to prepare a people fit for the Lord.”

Although Zechariah had been praying for many years for such a gift from the Lord, he doubted the angel. “How shall I know this? For I am an old man, and my wife is advanced in years.”

Then the angel said to Zechariah, “I am Gabriel, who stand before God. I was sent to speak to you and to announce to you this good news. But now you will be speechless and unable to talk until the day these things take place, because you did not believe my words, which will be fulfilled at their proper time.”

The words of the angel came true, and when the time was soon for her to have her son, she was visited by Mary, who would later be the mother of Jesus. When Elizabeth saw Mary, she felt her child jump for joy in her womb, and she said to Mary, “Most blessed are you among women, and blessed is the fruit of your womb.”

On the day Elizabeth’s son was born, the family felt he should be named Zechariah, after his father. From the time he saw the angel, Zechariah had not been able to speak a single word, so he wrote on a tablet, “John is his name.” Immediately he was able to speak again, and he began to praise God.

The friends and relatives were amazed, and said, “What, then, will this child be? For surely the hand of the Lord was with him.”

READ MORE ABOUT IT:
Luke 1

Q&A
1. Why did the angel take away Zechariah’s voice?
2. When was Zechariah finally able to speak again?

John the Baptist said that he was the voice that was to announce that Jesus was coming. He lived a very simple life, and wore a camel hair cloak circled by a leather belt. One of the most important moments in John’s life was when he baptized Jesus. John said that he was not important enough to even care for the shoes of Jesus, yet Jesus came to him for baptism. With this act, Jesus set an example for us to be baptized and then he began his ministry on earth. John’s life and ministry are mentioned in each of the four Gospels. In the first chapter of the Gospel of John, we are told that John the Baptist was to testify about a light, but he was not that light. The light refers to Jesus.

During the reign of Nero, the Caesar of the Roman empire in the middle of the first century, there was a great fire in the city of Rome that burned for many days. Much of the city was damaged or destroyed by the fire. Legends say that Nero played music and recited poetry after he saw the extent of the destruction, causing some people to wonder if he ordered the fire started or at least prevented it from being put out. In order to draw attention away from himself, Nero blamed the Christians for starting the fire, and he had many of them arrested and tortured or killed in extremely barbaric ways. Even some of the Romans who were used to the cruel games in the arenas felt sympathy for the Christians. We honor the sacrifice of these early martyrs on June 30.