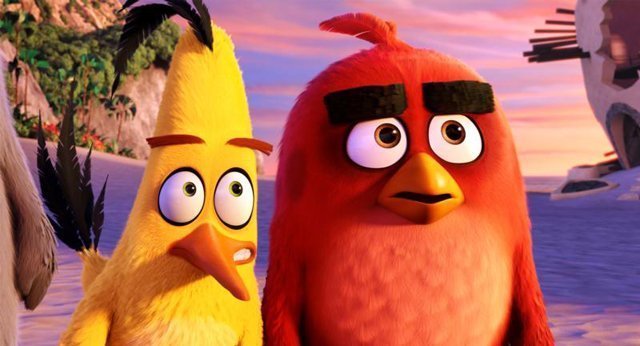 Chuck, voiced by Josh Gad, and Red, voiced by Jason Sudeikis, appear in the animated movie "The Angry Birds Movie." The Catholic News Service classification is A-II -- adults and adolescents. The Motion Picture Association of America rating is PG -- parental guidance suggested. Some material may not be suitable for children.
By Kurt Jensen
Catholic News Service
NEW YORK (CNS) — Take an addictive phone app, contrive a plot to "explain" motivations, chuck in puns, brief potty humor and lengthy slapstick sequences, and you have the inane 3-D animated adaptation "The Angry Birds Movie" (Columbia).
That may sound like a harsh assessment of cheerful, largely inoffensive kiddie fare. So let’s put it this way: Which would you rather do, play "Angry Birds" and hurl tiny flightless fowls at evil green pigs — which will at least focus your mind, however fleetingly — or watch a screenful of birds discuss their feelings for 97 minutes?
Among those emotions, in keeping with Hollywood’s endless emphasis on individuality, is a central character’s determination to dissent from the preternatural cheerfulness he finds all around him.
"Why do we have to agree?" Red (voice of Jason Sudeikis) asks the other inhabitants of Bird Island. "Why does it matter that we’re not the same?"
Sometimes, the film concludes, it’s important to have a warrior mindset. Especially so when the island’s eggs are at risk from invading pigs who want to enhance their diet with yolky goodness.
That certainly squares with just war theory, and viewers of faith willing to squint sufficiently can even read a pro-life message into the movie’s premise.
Red takes an anger management class, which proves futile but does supply him with a duo of new pals, both endowed with superpowers: Chuck (voice of Josh Gad) has the gift of great speed, while Bomb (voice of Danny McBride), as his name implies, can explode at will.
The pigs, led by Leonard (voice of Bill Hader), seduce the island’s residents with endless parties as a preliminary to their egg theft. To thwart them, Red and his friends seek out the Mighty Eagle (voice of Peter Dinklage), the only denizen of the island who can fly. But he’s too out of shape to be of any help, at least until the threat to the community’s future becomes more obvious.
From there, things progress along lines that the more than 3 billion people worldwide who’ve downloaded the app will find familiar. Co-directors Clay Kaytis and Fergal Reilly, working from a script by Jon Vitti, stage rescue sequences involving a giant slingshot that enables the birds to "fly" and hyperkinetic stunts once they land in the pigs’ complex lair.
The straightforward plot is unlikely to confuse — and the scenes of combat unlikely to frighten — any but the very youngest children. Accompanying adults, on the other hand, may well find themselves anxious for a speedy conclusion.
The film contains mildly scary action sequences and fleeting scatological humor. The Catholic News Service classification is A-II — adults and adolescents. The Motion Picture Association of America rating is PG — parental guidance suggested. Some material may not be suitable for children.
– – –
Jensen is a guest reviewer for Catholic News Service.
Copyright © 2022 Catholic News Service, Inc. All rights reserved. Linking is encouraged, but republishing or redistributing, including by framing or similar means, without the publisher's prior written permission is prohibited.