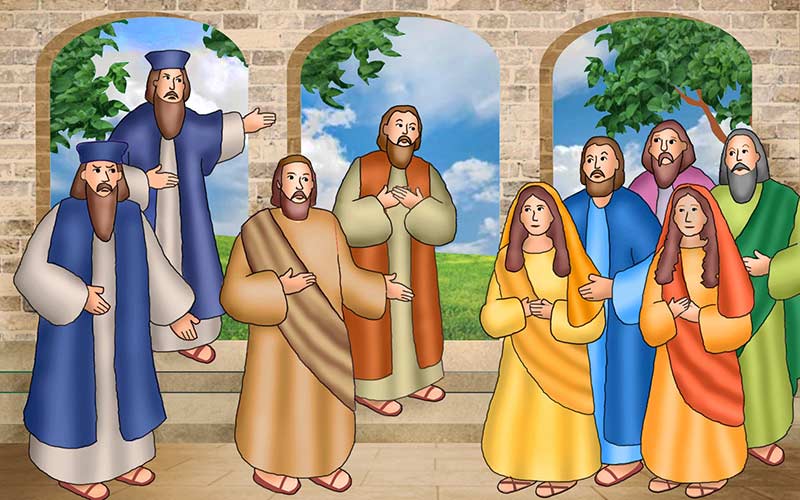 This is the artwork for Kids' Chronicle for April 27, 2022. (Illustration by Linda Rivers)

The apostles appear before the Sanhedrin

One day, after Jesus returned to his Father in heaven, the apostles were all together in Solomon’s Portico at the Temple in Jerusalem.

Although the people were afraid to join them, they held the apostles in esteem.

The people also brought their sick onto the streets on mats and cots. They hoped that Peter’s shadow would fall on the sick people as he walked by and they would be healed.

People from nearby towns also came to Jerusalem with their sick and those afflicted by unclean spirits, and all were cured.

The high priest and his companions, who were all Sadducees, became jealous. They rose up and laid hands on the apostles and put them in jail.

During the night, the angel of the Lord opened the prison doors and led them out.

“Go and take your place in the Temple area, and tell the people everything about this life,” the angel said.

The apostles went to the Temple area early in the morning and taught the people.

Not realizing that the apostles were in the Temple area, the high priest and his companions arrived and convened the Sanhedrin, the full senate of the Israelites. They sent court officers to retrieve the apostles from the jail.

The high priest questioned the apostles before the Sanhedrin. He reminded them that they had been given strict orders to stop teaching in Jesus’ name.

“We must obey God rather than men,” Peter and the apostles replied. “The God of our ancestors raised Jesus. … God exalted him at his right hand as leader and savior to grant Israel repentance and forgiveness of sins. We are witnesses of these things, as is the Holy Spirit that God has given to those who obey him.”

TRIVIA: What happened to the apostles after they appeared before the Sanhedrin? (Hint: Acts 5:40)

Answer: They were flogged and released.

There are several other times in the Bible when God helped apostles who were in jail.

For example, in Acts 12, we learn that King Herod was persecuting Christians. He had the apostle James killed, and he had Peter arrested and put in jail. He planned to put Peter on trial after the Passover.

On the night before Peter was to stand trial, he was secured in double chains and sleeping in his cell between two soldiers. Outside the door, guards kept watch on the prison.

The angel of the Lord suddenly appeared and woke Peter. The angel told him to gather his things and follow him.

St. Mary Mazzarello was born into a peasant family in Italy in 1837. She worked long hours in the fields and vineyards.

She joined a sodality whose members nursed victims of typhoid fever in 1860. Mary caught the fever and nearly died.

Her weakened health prompted her to change jobs, so she created a dressmaking business to employ local girls. This endeavor turned into the Salesian Sisters of St. John Bosco, which now has 1,400 houses in 54 countries.

Using the hints provided, fill in the blanks in the sentences about the first followers of Jesus.