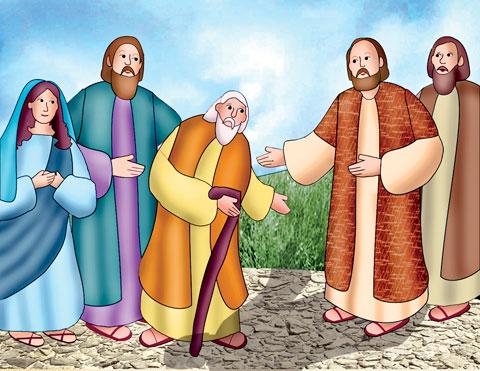 The apostles perform miracles and preach/a>

The apostles perform miracles and preach

The apostles performed many miraculous deeds and signs. The people of Jerusalem and other places where the apostles preached knew these men were very special to be able to do such things. As a result, many of these people believed in Jesus as the Messiah. Many of them brought their sick friends and relatives to the apostles, so they would be healed. The power of the Holy Spirit was so strong in the apostles that even their shadows passing over the sick people would heal them.

In spite of all the good things they were doing in and around Jerusalem, and even though they had earned the praise and gratitude of the people, the apostles had some enemies who did not like what was happening. The high priest and his political companions, who were the members of the Sanhedrin, were extremely jealous of the apostles. They schemed together and had the apostles arrested and put into jail.

The high priest and the Sanhedrin thought that this would take care of the apostles. They hoped that the people would forget about them and that the Sanhedrin would be seen again as the leading religious party of Jerusalem. But God was watching over his followers. During the night, while the apostles were in their cells, an angel of the Lord entered the jail and opened all of the doors. This angel led the apostles out and gave them a message from the Lord. “Go and take your place in the temple area, and tell the people everything about this life.” The apostles gathered at the temple as soon as it was light and began to preach to the people who were there.

The Sanhedrin also gathered early in the morning and ordered the apostles to be brought from the jail to stand before them. The court officers returned from the jail and reported to the Sanhedrin, “We found the jail securely locked and the guards stationed outside the doors, but when we opened them, we found no one inside.”

Then someone came into the courtroom and said, “The men whom you put in prison are in the temple area and are teaching the people.” The Sanhedrin sent their court officers out to bring the apostles back to them. They said to the apostles, “We gave you strict orders (did we not?) to stop teaching in that name.”

And Peter replied, “We must obey God rather than men.”

READ MORE ABOUT IT: Acts 5

1. Why did the Sanhedrin have the apostles arrested?

2. Why did Peter say they would not stop preaching?

Bernadette (1844-1879) was the oldest of six children whose parents were very poor. She also suffered from asthma and other health problems. When she was in her early teens, she began to have visions at a nearby grotto, which was by a river. She would see a woman who told her to build a chapel on the site of the visions. When word of Bernadette’s visions began to spread around France, thousands of people would go with her, hoping to see what she was seeing. On one occasion, the woman told her, “I am the Immaculate Conception.” Also because of the visions, people would question Bernadette constantly, so she was forced to seek shelter in a local hospice run by nuns. She later became a novitiate for the order of Notre-Dame de Nevers, where she died while still a young woman. We remember her on April 16. 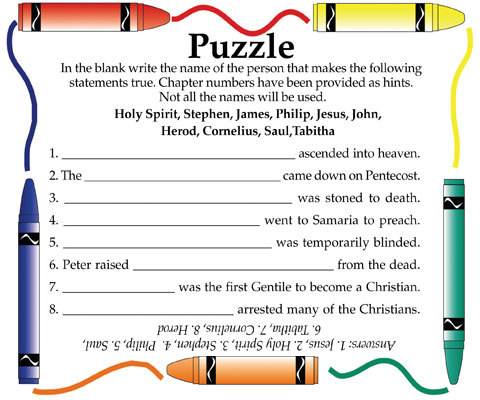