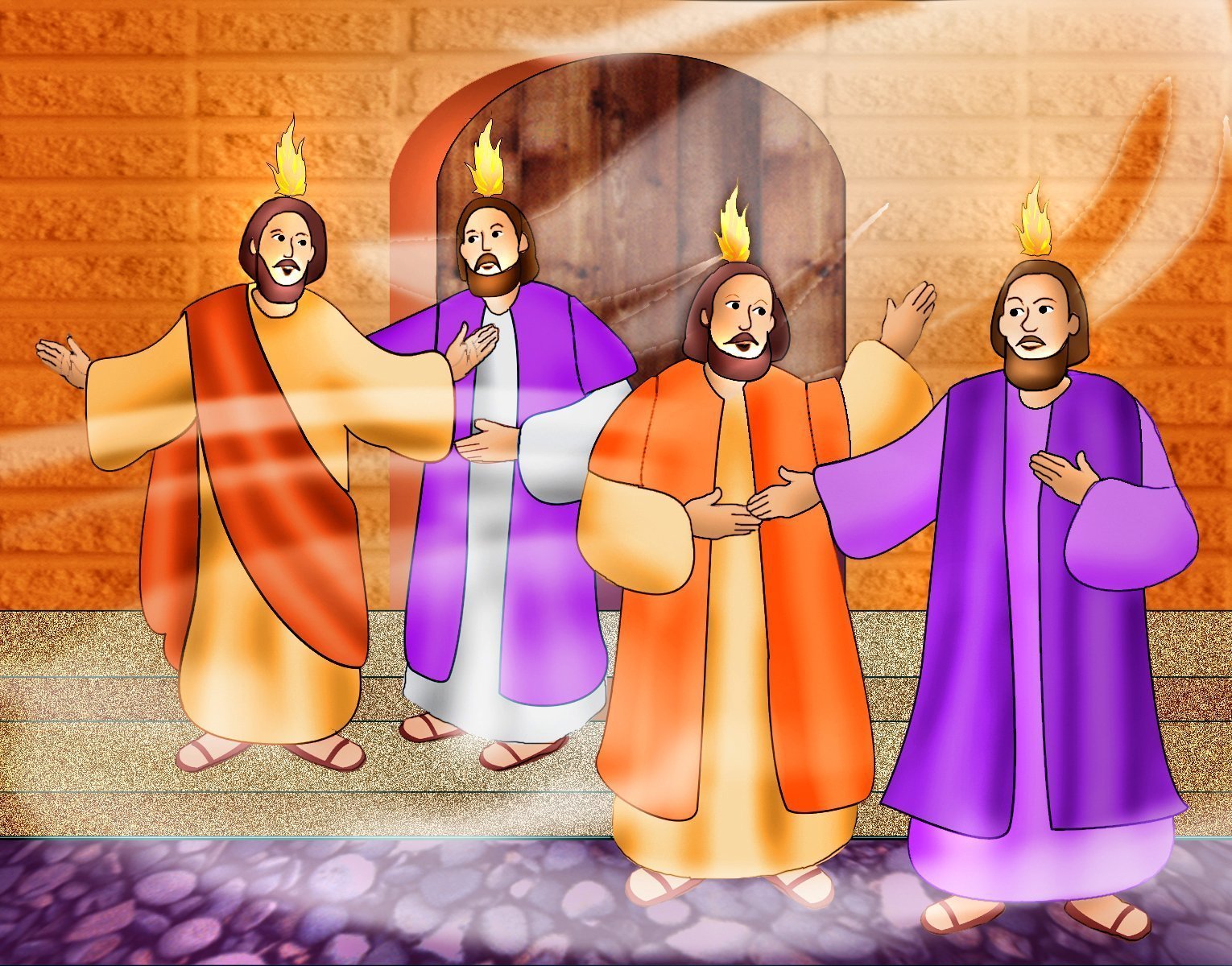 After Jesus had ascended into heave, the apostles stayed in Jersualem and waited for the coming of the Holy Spirit.

The Twelve were gathered in one place when the time of the Jewish feast of Pentecost had ended. Suddenly, they heard a loud sound that filled the entire house that they were in. Even though they were indoors, the noise reminded them of a great rush of wind coming from the sky.

Then they saw tongues of fire, which separated and rested upon each one of them.

The Holy Spirt had come.

Then something even more incredible happened.

After the Twelve received the Holy Spirit, they suddenly could speak other languages, which was something they could not do before.

There were many Jews who were visiting Jerusalem for the feast of Pentecost, and a large crowd of them had heard the loud sound of rushing wind. They came to the apostles’ house to find out what was going on. When they heard the apostles speaking in foreign languages, they were amazed. These visiting Jews had come to Jerusalem from many different countries, and each was hearing his own language being spoken.

“Are not all these people who are speaking Galileans?” they asked each other in wonder. “Yet we hear them speaking in our tongues of the mighty acts of God.”

Others in the crowd made fun of the apostles, saying they had been drinking too much wine.

Then Peter stood up to address the crowd. He gave a great speech, telling everyone that the words of the prophets had come to pass. God had poured out his spirit upon mankind, and Jesus, who had been crucified, was indeed the Messiah that had been foretold.

The people in the crowd then wanted to now what they should do.

“Repent and be baptized, every one of you, in the name of Jesus Christ for the forgiveness of your sins; and you will receive the gift of the holy Spirit,” Peter told them.

Those who heard Peter’s speech and believed what he said were baptized that day. In all, about 3,000 Jews became followers of Jesus on the day the Holy Spirit came to the apostles.

1. What sound did the apostles hear in the house?

2. Who came to the apostles’ house to find the source of the sound?

Bible Trivia: What  does the Jewish feast of Pentecost celebrate today?

Answer: God giving the law to the Israelites

There is another place in the Bible that talks about people suddenly being able to speak foreign languages. But instead of this ability being a gift, it was a consequence from God.

In Genesis 11, we learn that at one time, all the people on earth spoke the same language. They settled in a land called Shinar and decided to build a great city, with a tower that reached to heaven. They thought this would show how powerful they were. What it really showed was that they believed they no longer needed God.

God saw what was going on and decided to confuse their language so the people couldn’t understand each other. When God did this, the people stopped their building and went to live in different places.

St. Joan of Arc was born in France in 1412. When she was young, France was fighting a civil war and also was trying to stop the English king from taking the French throne.

At age 14, Joan began to hear the voices of St. Michael, St. Catherine and St. Margaret. In 1428, they told her to help the king of France reconquer his kingdom. It took a little while, but Joan convinced the king that she had received a mission from God to help him.

Joan was given soldiers to command, and she won may battles. She was eventually captured and handed over to the English, who burned her at the stake for being a heretic. Many years later, Pope Callistus III reopened her case and found that she was not a heretic.