The apostles receive the Holy Spirit after Pentecost - Catholic Courier 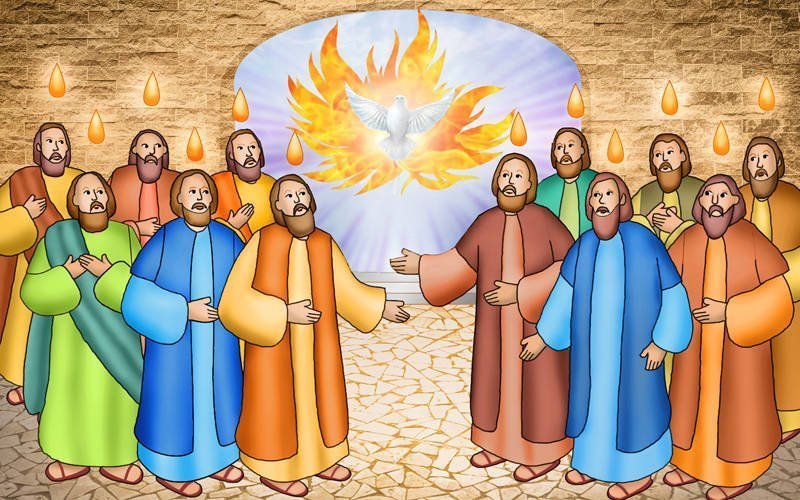 The apostles receive the Holy Spirit after Pentecost

The apostles receive the Holy Spirit after Pentecost

When the time for Pentecost was fulfilled, the apostles were together in a house in Jerusalem.

Suddenly, they heard a loud sound from the sky, like a strong, driving wind. Then they saw tongues of fire, which parted and came to rest on each one of them.

The apostles were filled with the Holy Spirit. They began speaking in different languages, because the Spirit enabled them to do so.

Devout Jews from many different nations were in Jerusalem for Pentecost. When they heard the loud sound coming from the apostles’ house, they went to investigate.

They were astonished to hear the apostles speaking in different languages.

“Are not all these people who are speaking Galileans? Then how does each of us hear them in his own native language?” they asked in surprise. “We are Parthians, Medes and Elamites, inhabitants of Mesopotamia, Judea and Cappadocia, Pontus and Asia, Phrygia and Pamphylia, Egypt and the districts of Libya near Cyrene, as well as travelers from Rome, both Jews and converts to Judaism, Cretans and Arabs, yet we hear them speaking in our own tongues of the mighty acts of God.”

Some wondered what it meant, but others just scoffed.

“They have had too much new wine,” they sneered.

Peter stood with the apostles and raised his voice.

“These people are not drunk, as you suppose, for it is only 9 o’clock in the morning,” he said.

Peter explained that a prophecy from the prophet Joel was being fulfilled, which said God would pour out a portion of his spirit upon all flesh and people would be able to prophesy.

Peter then told those gathered about Jesus’ life and ministry, and he explained that Jesus was the Messiah.

“What are we to do, my brothers?” the people asked.

“Repent and be baptized, every one of you, in the name of Jesus Christ for the forgiveness of your sins; and you will receive the gift of the Holy Spirit,” Peter said.

About 3,000 people who believed what Peter said were baptized that day.

1. What sound did the apostles hear in their house?

2. What were the apostles able to do after receiving the Holy Spirit?

TRIVIA: What did Jesus tell the apostles to wait for? (Hint: Acts 1:4)

Answer: The promise of the Father.

In Acts 1, we read about the first Christian community in Jerusalem.

One day, the community had a decision to make.

Peter stood in the midst of about 120 Christians and spoke of the apostle Judas, who had betrayed Jesus and later killed himself.

Peter said that it was written in the Book of Psalms, “May another take his office.”

“Therefore,” he said, “it is necessary that one of the men who accompanied us the whole time the Lord Jesus came and went among us, beginning from the baptism of John until the day on which he was taken up from us, become with us a witness to his resurrection.”

Two men were suggested: Matthias and Joseph, who was called Barsabbas and also known as Justus.

After the two men were suggested, everyone began to pray.

“You, Lord, who know the hearts of all, show which one of these two you have chosen to take the place in this apostolic ministry from which Judas turned away to go to his own place,” they said.

Then everyone was given lots, and the lot fell upon Matthias.

From that day on, Matthias was counted with the 11 apostles.

St. Lutgardis was born in Belgium in 1182. At age 12, she went to live with Benedictine nuns after her father lost her dowry.

After Christ appeared to her and showed her his wounds, she renounced the world to become a nun. She later left the Benedictines for a stricter life with Cistercians at Aywieres.

Lutgardis lost her eyesight in 1235 but considered it as another way of being detached from the world.

She became known as a great spiritual counselor and healer, and she is now considered among the great medieval women mystics.

Using the hints provided from the Acts of the Apostles, circle T if a sentence is true, and circle F if it is false. If a sentence is false, write the correct answer on the line provided.