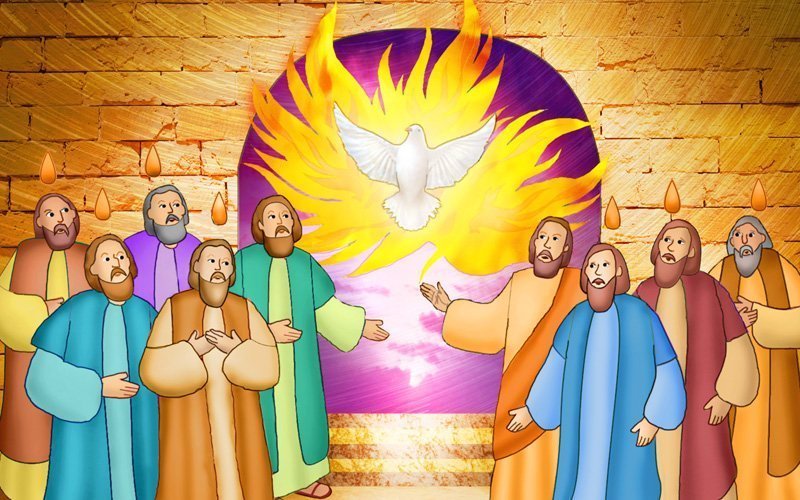 One day, the apostles were all in one place together. It was the time of Pentecost, a Jewish festival that was sometimes called the Feast of Weeks.

Suddenly, the apostles heard a noise from the sky like a strong, driving wind. The sound filled the entire house in which they were staying.

When the tongues of fire rested upon them, they were filled with the Holy Spirit. The Spirit gave them the ability to proclaim God’s word in languages other than their own.

Devout Jews from all over the world had come to Jerusalem for the festival. When they heard the noise of the Holy Spirit’s coming, a large crowd of people gathered at the house in which the apostles were staying.

Everyone spoke different languages and were shocked to be able to understand what the apostles were saying.

“Are not all these people who are speaking Galileans? Then how does each of us hear them in his own native language?” the people wondered. “We are Parthians, Medes, and Elamites, inhabitants of Mesopotamia, Judea and Cappadocia, Pontus and Asia, Phrygia and Pamphylia, Egypt and the districts of Libya near Cyrene, as well as travelers from Rome, both Jews and converts to Judaism, Cretans and Arabs, yet we hear them speaking in our own tongues of the mighty acts of God.”

Some people were skeptical and thought the apostles had been drinking too much wine.

Peter stood up and gave a speech. He told the people about the coming of the Holy Spirit and about Jesus being the Messiah.

“Repent and be baptized, every one of you, in the name of Jesus Christ for the forgiveness of your sins; and you will receive the gift of the Holy Spirit,” he said.   About 3,000 people accepted Jesus and were baptized that day.

1. In what form did the Holy Spirit appear to the apostles?

2. How many people were baptized after Peter’s speech?

ESSAY: Describe why you are grateful for the gift of the Holy Spirit.

Through the gift of the Holy Spirit, the apostles were able to speak other languages. But at one time, everyone on Earth could understand each other.

In Genesis 10, we read that the descendants of Noah’s sons branched out and created all the nations of the world. In Genesis 11, we learn that at the time, the entire world spoke the same language.

As people migrated from the east, they came to the valley of Shinar in the land of ancient Babylonia, which is located in present-day Iraq.

“Come, let us build ourselves a city and a tower with its top in the sky, and so make a name for ourselves; otherwise we shall be scattered all over the earth,” the people said to each other.

God came to see the city and the tower the people were building. He saw that they were becoming wicked and prideful, and they thought they didn’t need to rely on God for anything.

“Come, let us go down and there confuse their language, so that no one will understand the speech of another,” God said.

God made it so the people no longer spoke the same language. They stopped building the tower and city, and God scattered them over all the Earth.

That is why it was called Babel, because it was there that God confused the speech of all the world.

St. John Fisher was born in England in 1469. He was a distinguished scholar at Cambridge University and was ordained a priest at age 22.

John eventually became bishop of Rochester, England. He also was a counselor to Catherine of Aragon, King Henry VIII’s wife, during the time the king sought to divorce Catherine.

King Henry wanted John to accept him as the head of the Church of England. When John refused, King Henry had him imprisoned and executed in 1535. We remember John on June 22.