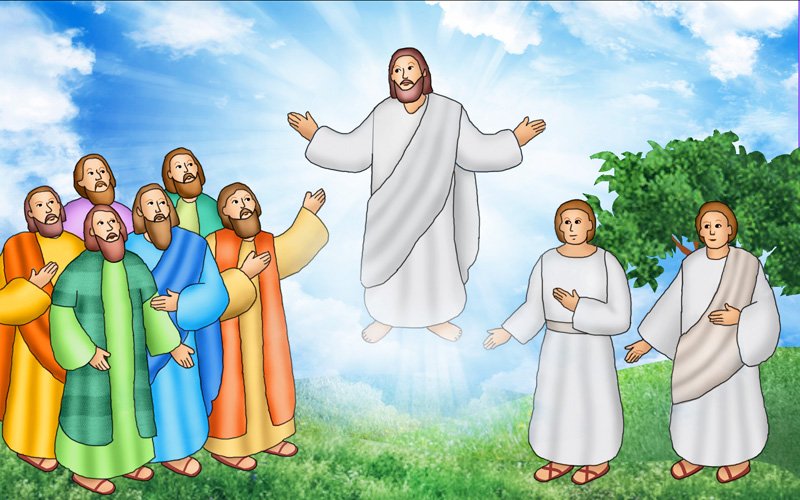 The apostles watch Jesus into heaven

The first time, he appeared and spoke to Mary of Magdala, who was visiting his empty tomb. Jesus asked Mary to deliver a message to the apostles.

Afterward, he twice appeared to his friends in a locked room in Jerusalem. And he also walked with two of his followers who were talking about the events surrounding Jesus’ death and resurrection as they traveled from Jerusalem to Emmaus.

“He presented himself alive to them by many proofs after he had suffered, appearing to them during 40 days and speaking about the kingdom of God,” Luke, the author of the Acts of the Apostles, said in describing these events to a person named Theophilus.

“While meeting with them, he enjoined them not to depart from Jerusalem, but to wait for ‘the promise of the Father about which you have heard me speak; for John baptized with water, but in a few days you will be baptized with the Holy Spirit,’” Luke explained.

Jesus gathered with the apostles on Mount Olivet, Luke continued.

“Lord, are you at this time going to restore the kingdom to Israel?” the apostles asked.

When Jesus finished speaking, he was lifted up, and a cloud took him from their sight.

As Jesus was going, the apostles looked intently at the sky. At first, they didn’t notice that two men dressed in white garments were suddenly standing beside them.

“Men of Galilee,” the men said, “why are you standing there looking at the sky? This Jesus who has been taken up from you into heaven will return in the same way as you have seen him going into heaven.”

Afterward, the apostles descended Mount Olivet and returned to Jerusalem.

1. Where did Jesus gather with the apostles?

2. Who suddenly appeared with the apostles?

Where did the apostles go after returning to Jerusalem? (Hint: Acts 1:13)

After watching Jesus ascend into heaven, the apostles returned to Jerusalem to wait for the coming of the Holy Spirit.

When the time of Pentecost was fulfilled, they were gathered in one place. The apostles suddenly heard a noise like a strong, driving wind coming from the sky. It filled the entire house in which they were staying.

Then tongues as of fire appeared. The tongues of fire parted, and one came to rest on each apostle.

When the tongues of fire rested upon them, they were filled with the Holy Spirit, and they began to speak in different languages.

When the Holy Spirit came, there were Jews from many different nations who had come to Jerusalem to celebrate Pentecost. They, too, heard the sound coming from the house in which the apostles were staying, and some of them came to investigate.

They were amazed that the Galilean apostles could speak the languages of the Jews from all the other nations. Some thought the apostles were drunk.

Peter gave a speech to let everyone know that they were not drunk, and he also told them about Jesus. After hearing Peter’s message, about 3,000 people were baptized.

Germaine Cousin was born in France in 1579. She was a sickly child and also had a withered hand.

Her stepmother was cruel, only giving her scraps to eat and forcing her to sleep in the stable or a cupboard under the stairs. At age 9, she was tasked with tending the family’s sheep.

Neighbors made fun of her generosity and religious devotion, but they changed their minds when one day Germaine opened her apron and beautiful flowers fell out.

Many miraculous healings have been attributed to Germaine, who died in 1601. We honor her on June 15.

Answers: promise, wait, father, for, the, of, the

Wait for the promise of the Father.