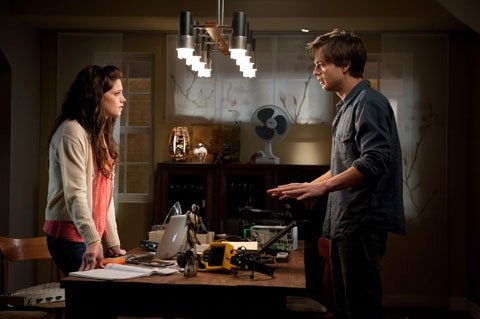 NEW YORK (CNS) — Note to self: Never take on a dark supernatural force armed only with a baseball bat; whatever it is, it’s unlikely to be intimidated. We have actor Sebastian Stan to thank for that lesson. He plays Ben, half of the couple who are bewitched, bothered and, dare we say, driven batty by "The Apparition" (Warner Bros.). His live-in girlfriend Kelly (Ashley Greene), sad to say, reacts to their sinister situation in equally illogical ways.

At least Kelly can plead ignorance. She knows nothing of Ben’s past dabbling in the occult, nor of his participation in a parapsychology experiment that unleashed an otherworldly entity. So when that same pesky something-or-other starts opening locked doors and growing unsightly mold in the suburban investment property Kelly and Ben are minding for her parents, it’s hardly surprising that she’s perplexed.

Helming his feature debut, writer-director Todd Lincoln borrows rather shamelessly from the "Paranormal Activities" franchise with results that are mostly bloodless — in both a good and bad sense.

Thus, though it manages to avoid offending, his house of horrors tale fails to engage. Sometimes inept dialogue combines with generic characters and their unlikely behavior to blunt any potential impact.

As the forgoing plot description may have made clear, there is some metaphysical gobbledygook of the H.P. Lovecraft variety on offer here. But grownups will easily dismiss these jumbled references, along with a theory that purgatory holds beings besides as-yet unperfected human souls. These notions are spouted by Patrick ("Harry Potter" stalwart Tom Felton), organizer of the seance that got Kelly and Ben into their moldy mess in the first place.

Either as an homage to Hitchcock’s "Psycho" or for less lofty reasons, we follow Kelly into the shower at one point, though we see her only from a distance and through the modesty-preserving medium of a semi-opaque shower curtain.

She also does some under-the-sheets canoodling with Ben and demonstrates her distracted state by spending a series of scenes clad only in her underwear. Presumably, she’s not the only one who’s meant to be distracted.

The film contains minimal violence and gore, cohabitation, a brief, nongraphic bedroom scene, blurred upper female and partial nudity, a couple of crude words, at least one crass term and fleeting innuendo. The Catholic News Service classification is A-III — adults. The Motion Picture Association of America rating is PG-13 — parents strongly cautioned. Some material may be inappropriate for children under 13.