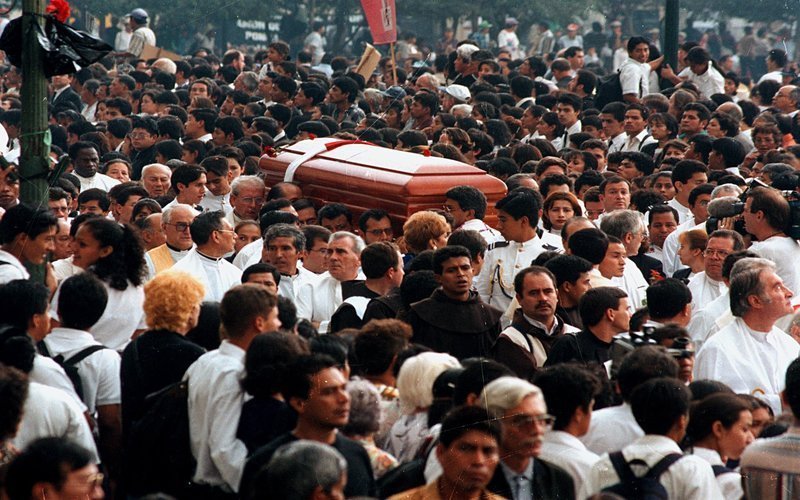 This is an image from the TV show "The Art of Political Murder" streaming on HBO Max. (CNS photo via HBO)

NEW YORK (CNS) — Many people are familiar with the life story of St. Oscar Romero, the archbishop of San Salvador, El Salvador.

A vocal opponent of the excesses committed by his nation’s military, he was slain by a right-wing gunman March 24, 1980, while saying Mass. He was canonized by Pope Francis in 2018.

Though he’s often called the Oscar Romero of his native land, the biography of Bishop Juan Jos√© Gerardi Conedera, an auxiliary bishop of Guatemala City, may be less well known. Yet his fate was equally tragic and his prophetic martyrdom equally honorable.

On April 24,1998, Bishop Gerardi publicly presented “Guatemala: Nunca Mas,” a report by his archdiocese’s Office of Human Rights documenting atrocities committed by government forces during the long civil war of 1960-1996. Two days later, soldiers fatally bludgeoned the 75-year-old prelate in the garage of his rectory.

Executive produced by, among others, George Clooney and his frequent collaborator Grant Heslov, “The Art of Political Murder” explores the investigation that followed Bishop Gerardi’s slaying. Successful as a crime procedural but wanting as a human-interest narrative, the 90-minute documentary is streaming on HBO Max.

As bishop of Quiche, Guatemala, in the early 1980s Bishop Gerardi was, says former human rights office director Ronalth Ochaeta, “no different than other bishops,” who provided “pastoral care to those most in need.” Because he refused to cooperate with the military, however, the prelate was unfairly labeled the “guerillas’ bishop,” Ochaeta recalls.

Having survived one attempt on his life, the cleric was forced into exile in Costa Rica before returning to his homeland in 1984. Still, Bishop Gerardi remained an enemy of the state in the eyes of the regime and the military was surveilling him at the time of his death.

Along with its references to conflict and crime, the film includes such mature themes as homosexuality and illicit drug use as well as some vulgar language. Given its educational import, some parents may nonetheless deem the program acceptable for older adolescents.

Archival images of the throngs who accompanied Bishop Gerardi’s funeral procession provide the show’s most touching moments. Their great love for their fallen shepherd is palpable.

The tale of courageous prosecutors taking over an initially botched proceeding and confronting their country’s dangerously powerful armed forces in their pursuit of the facts is engaging. But viewers of faith in particular will likely feel as though too little attention has been paid to Bishop Gerardi himself.

How did it feel to live in exile? What did the bishop think about the controversies surrounding him? Most importantly, how did he summon the courage to live as a marked man?

“The Art of Political Murder” addresses some important questions. But it leaves too many others unresolved.