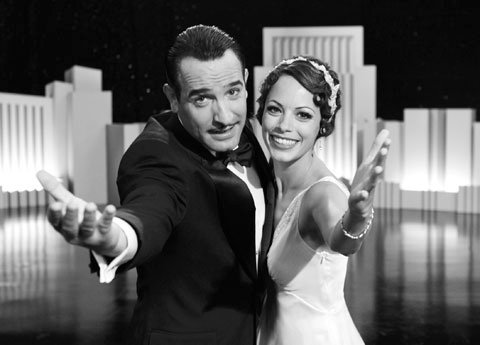 NEW YORK (CNS) — At a time when Hollywood movies tend to get louder and more offensive, "The Artist" (Weinstein) is a breath of fresh air — without uttering a word. Who knew a modern-made silent movie could be so charming and entertaining?

French director Michel Hazanavicius displays a flair for re-creating the techniques of old Hollywood, from the lively musical score and use of intertitles to the dramatic lighting and good use of the studio back lot. He also draws from his actors the pure emotions that can be evoked with a simple expression or a single tear.

In this unique film, the sounds of silence ring loud and clear.

It’s 1927, and George Valentin (Jean Dujardin) is a dashing star of the silent screen. In the style of Douglas Fairbanks, he plays every role with panache: the handsome lover, the swashbuckling hero, the athletic comedian with a sidekick Jack Russell terrier (who nearly steals the movie).

Outside the premiere of his latest film, "A Russian Affair," Valentin bumps into an adoring fan, Peppy Miller (Berenice Bejo). The paparazzi do their thing, and soon newspaper headlines blare, "Who’s That Girl?"

The notoriety gives Miller the confidence to pursue her acting dream. She auditions at Kinograph Studios, run by Al Zimmer (John Goodman), and lands a bit part in Valentin’s next movie. They dance, and the attraction is powerful.

Valentin’s sourpuss wife, Doris (Penelope Ann Miller), suspects an affair and leaves him. Far more loyal to the star are Jack (the canine) and Clifton (James Cromwell), his valet.

"The Artist" branches into two stories, as it chronicles the rise of the ingenue and the decline of the star. Hollywood is changing fast; silent films are being phased out for "talkies," and fresh pretty faces like Miller’s are preferred to Valentin’s dated charms.

Abandoned by Zimmer and the studio, Valentin goes his own way, financing his own silent movie (a flop) while Miller becomes a major star. He never begrudges her success, even as he sinks deeper into debt and despair.

To her credit, Miller, though seduced by fame and fortune, never forgets the kindly man who gave her her first big break in show business.

"The Artist" is pure cinematic magic, at turns zany and hilarious, sad and affecting, uplifting and inspiring. Regrettably, the elements listed below prevent it from being enjoyed by the entire family, for the joyous and (largely) wholesome film that it is.

The film contains one obscene hand gesture and two scenes of attempted suicide. The Catholic News Service classification is A-III — adults. The Motion Picture Association of America rating is PG-13 — parents strongly cautioned. Some material may be inappropriate for children under 13.