The baby Jesus is presented at the temple - Catholic Courier 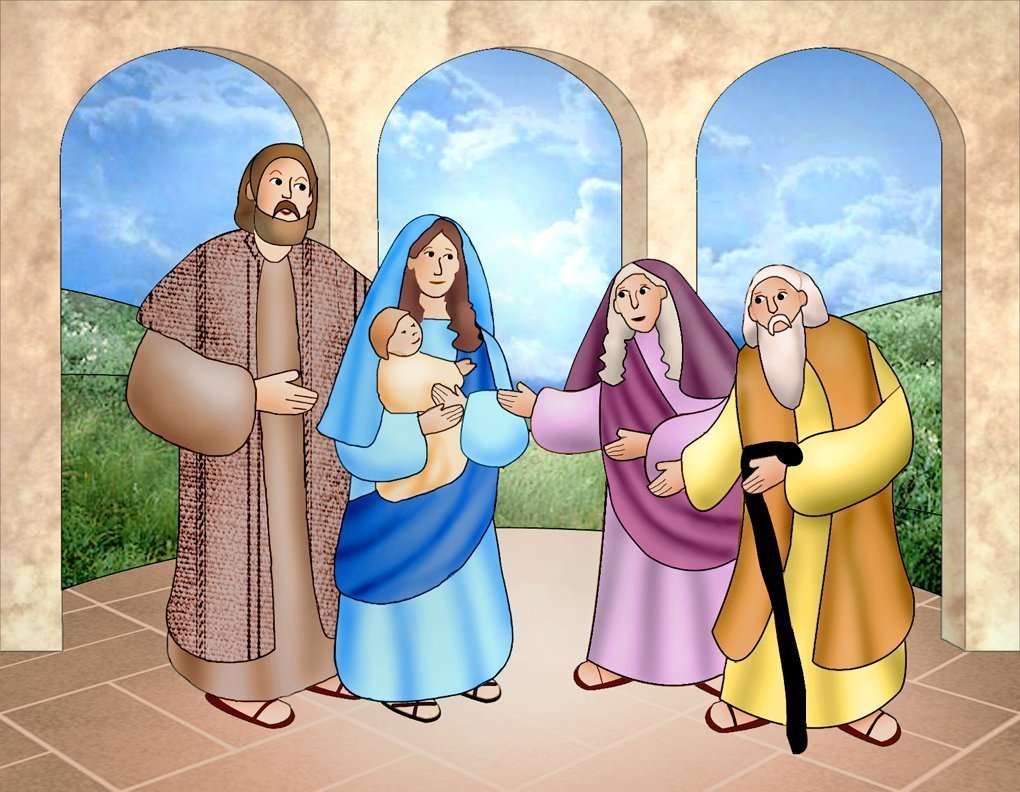 The baby Jesus is presented at the temple

The baby Jesus is presented at the temple

Jesus had been born in Bethlehem, the home of his father, Joseph. Because of the census the town was filled with other people who had also come to be counted. There were no rooms available at the inn, so Joseph and his wife Mary had to sleep in the stable. And that was where their son was born.
Shepherds who had seen an angel in the night sky came to see the baby. The angel told them, “For today in the city of David a savior has been born for you who is Messiah and Lord.” The shepherds told Mary and Joseph what they had seen, and they left praising God because they had seen a miraculous child.
When the time had come for Jesus to be purified according to the laws established by Moses, Joseph and Mary brought their son to the temple. A man named Simeon, who lived in Jerusalem, was a faithful follower of God’s commandments. He had seen a vision that he would not die before seeing the promised Messiah. He knew when he saw the baby Jesus that this was the Messiah.
He held Jesus in his arms, looked toward heaven and said, “Now, Master, you may let your servant go in peace, according to your word, for my eyes have seen your salvation, which you prepared in sight of all the peoples, a light for revelation to the Gentiles, and glory for your people Israel.” Mary was astonished to hear such words spoken by such an important man about her son, even though she knew Jesus was special.
Then Simeon looked at Mary and said, “Behold, this child is destined for the fall and rise of many in Israel, and to be a sign that will be contradicted … so that the thoughts of many hearts may be revealed.”
A prophetess named Anna was an old woman who spent most of her time fasting, praying and praising God. She stood close in order to see Jesus, and then she praised God for sending a child who would redeem Israel. Then, after following all of the laws that applied to the birth of a child, Joseph and Mary returned to their home in Nazareth in Galilee. Jesus grew up to be a strong, healthy boy who was wise and who was blessed by the favor of God.
READ MORE ABOUT IT:
Luke 2

Q&A
1. Why did Joseph bring Jesus to the temple?
2. Why was Simeon happy to see Jesus?

The Old Testament — the books about events that took place before the birth of Jesus — has many references to a Messiah, or a person who would be a special spiritual leader sent from God.
Some of the prophecies said this Messiah would be a descendant of David. The Gospel of Matthew lists the family tree of Joseph, the earthly father of Jesus, and proves that Joseph was a descendant of David.

Many of the people who were waiting for the Messiah to come thought he would be a powerful king and soldier who would conquer all of the oppressors and enemies of Israel. It was probably very difficult for them to accept that their Messiah had not been born in a in a palace surrounded by servants, but in a manger surrounded by animals.
The Bible tells us of the ministry of Jesus and the miracles he performed, the greatest of those being his resurrection from the dead, so that we might live.

Egwin (d. 717) was committed to serving God from the time he was a young boy. He became Bishop of Worcester in 692, but because he spoke out against evil, he angered some people in his congregation.
He was called before the pope to answer charges that had been made against him and cleared his name. When he returned home, he built the abbey of Evesham with financial and political support from Ethelred, the King of Mercia.
Egwin later made a second visit to Rome, but he had no charges to answer for. He was given the support of Pope Constantine and was able to make the abbey one of the most important religious sites in England. We honor him on Dec. 30.