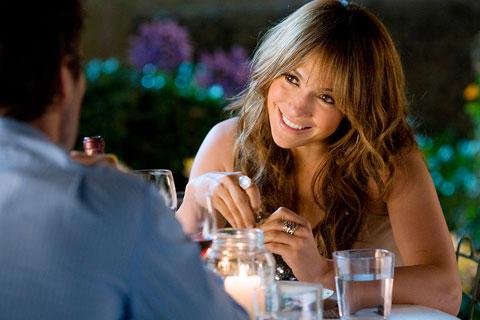 NEW YORK (CNS) — "The Back-Up Plan" (CBS Films) is a dull and predictable romantic comedy that is neither very romantic nor comedic. It suffers from two fatal flaws: There’s not a drop of chemistry between its two magnificent-looking leads and, far more significantly, it takes a warped moral view of what it means to have a baby.

The film opens with Zoe (Jennifer Lopez), a pet store owner, at the fertility clinic, her shapely legs in the air, as the doctor (Robert Klein) inseminates her with sample CRM1014 — "a redhead." "Together we will make a beautiful baby," he intones, as Zoe gazes toward heaven, praying her dream will come true. This is her personal "back-up plan." "I could not find ‘the one,’" she says. "I want a family."

Zoe gets her wish — she conceives twins — and positively blossoms, joining the "Single Mothers and Proud" support group ("We wanted a child and we made it happen on our own," the group leader declares). She’s thrilled to be pregnant and happy on her own, until Stan (Alex O’Loughlin), a cheese maker, gets in her way. Zoe falls hard, and she and Stan have rough sex amid racks of ripening goat cheese before she comes clean and reveals her condition. Stan freaks out, and the rest of the film alternates between Zoe and Stan pledging their undying love and commitment to each other and to her unborn twins, and the pair determining to go their separate ways.

Certainly their friends are no help. Mothers in this film openly "hate" their bratty kids and mourn the loss of their once-toned bodies. A father sums up children in this way: "Kids are awful, but then something incredible happens, but then they’re awful again." Single mothers, having sworn off men, give birth underwater in an inflatable pool amid pagan drumbeats and chants (the birth scene is not for the squeamish).

In extolling the virtues of artificial insemination and deliberately chosen single parenthood, "The Back-Up Plan" stands in direct contradiction to Catholic moral doctrine. Given the shambles that is Zoe’s life, it’s not hard to see why the church teaches what it does. Zoe wants her baby at any cost, but once she meets Mr. Right, the pregnancy gets in the way (literally). These are not Stan’s kids, which is why he rebels.

Such are the consequences when a child is conceived outside the bond of marital love, when the unitive and procreative purposes of God-given human sexuality are separated, and when the reciprocal self-giving of spouses for the transmission of life gives way to expediency.

To quote the Vatican’s 1987 instruction "Donum Vitae" ("The Gift of Life"): "The child is not an object to which one has a right, nor can he be considered as an object of ownership; rather, a child is a gift, ‘the supreme gift,’ and the most gratuitous gift of marriage, and is a living testimony of the mutual giving of his parents."

"I wanted a baby and thought I had to go it alone," Zoe muses as she surveys the wreckage. The lesson here is: She didn’t have to, and shouldn’t have — in spite of the film’s "happy" ending.

Directed by Alan Poul in his feature film debut, "The Back-Up Plan" is also an in-your-face comedy that resorts too often to poop jokes and vulgarity for laughs.

McAleer is a guest reviewer for the U.S. Conference of Catholic Bishops’ Office for Film & Broadcasting. More reviews are available online at www.usccb.org/movies.