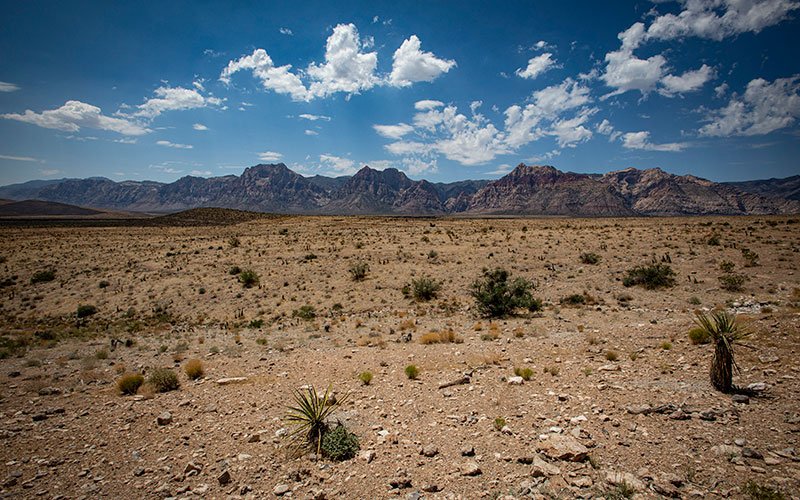 A desert is seen in this illustration photo. Abba Moses, one of the desert fathers, exemplifies a person who is "poor in spirit" by his words and actions. (CNS photo by Chaz Muth)

This is the first installment of our eight-part series on the beatitudes. This package discusses what it means to be “poor in spirit.”

But imagine being one of the original hearers and feel for a moment the anticipation as this peculiar rabbi named Jesus opens his mouth and begins to speak. What sort of emotions run through you as you hear those first words spoken with authority and conviction:

“Blessed are the poor in spirit, for theirs is the kingdom of heaven” (Mt 5:3).

What a strange way to start a sermon! I’m sure this first beatitude raised a lot of questions in the hearts of its hearers.

For those who wanted to be among the blessed and experience the kingdom of heaven, perhaps the most important question to ask was: What concretely does a person “poor in spirit” look like?

There’s a story from the desert fathers that helps me visualize what it looks like to be poor in spirit. In the desert of Scetis in Egypt, there was a young monk who committed some fault. The leaders called an assembly to condemn the brother and invited Abba Moses to come and join.

At first Abba Moses refused the invitation, but they sent an envoy to him with the message that the assembly was awaiting his arrival. At this message, he got up and set out toward the gathering. First, however, he grabbed one of the baskets he made and sold for a living and filled it with sand.

Now the basket Abba Moses chose had a hole in it, so that the sand slowly leaked out behind him as he journeyed. When he arrived at the site of the assembly, the other leaders came out to meet him. Seeing Abba Moses holding the still-leaking basket, they inquired into the meaning of this bizarre sight.

And Abba Moses said to them, “The grains of sand are my sins which are running out behind me. I do not see them, and yet this day I have come to judge some fault of another.” When the other leaders heard this from him, they forgave the brother and set him free, saying nothing further of the fault.

In this story, Abba Moses exemplifies a person who is “poor in spirit” by his words and actions. When he receives the invitation to come and join in judgment of the younger monk, he has a choice to make.

On the one hand, he is an elder monk and his condemnation has been personally requested. The facts of the case are not in dispute: The young brother’s guilt is apparently evident. It would seem Abba Moses is justified in passing his own judgment.

On the other hand, something prevents Abba Moses from following this path of condemnation. That obstacle is the Abba’s awareness of his own faults and failures. He feels acting as a self-assured and self-sufficient judge would be to distort the reality of his condition.

He dramatically illustrates the absurdity of his position by means of the basket leaking sand. In God’s eyes, he is as absurd passing judgment on his brother given his own faults as he appears in the eyes of his peers carrying this leaking basket.

The critical point of the story then is not so much that Abba Moses is poor in spirit, but rather that he acknowledges and lives out of his poverty of spirit. He does not try to hide his fragility and dependence on God’s mercy and love. He empties himself of all ego and self-assertion. This is his blessing!

This is the blessing of the poor in spirit, and only those who recognize their poverty have the capacity to reach out and seize the blessing God offers them to live not out of their own poor spirit, but rather to be filled with the spirit of God.

When we recognize our emptiness and choose to receive God’s spirit, we open up a space for the breaking in of the kingdom of God, which Jesus Christ inaugurated in his incarnation and continues to bring to fulfillment through the promised gift of our Advocate, the Holy Spirit.

This interruption of God’s kingdom into our disorderly world occurs through people like Abba Moses. His humility transforms the lives of all the other characters in the story. The other elders are moved to forgiveness. The younger monk receives forgiveness and a taste of the mercy of God.

Through Abba Moses, though merely one man poor in spirit, the kingdom of God enters into the tired world of faults and denouncements and makes all new with the sweetness of divine grace, peace and mercy.

(Joseph McHenry is a seminarian of the Archdiocese of Washington and is studying theology at The Catholic University of America.)