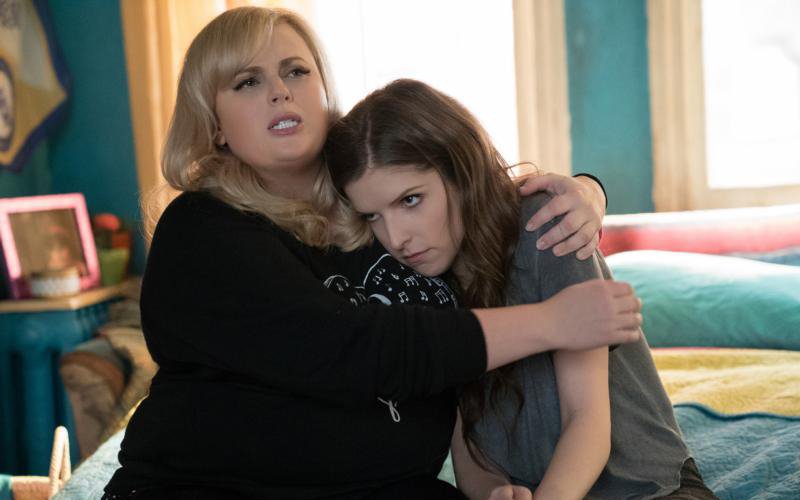 Rebel Wilson and Anna Kendrick star in a scene from the movie "Pitch Perfect 3." (CNS photo by Universal)

NEW YORK (CNS) — The third time’s not a charm for “Pitch Perfect 3” (Universal), a discordant and exceedingly unfunny musical comedy.

Although this second sequel in the five-year-old film franchise, directed by Trish Sie (“Step It Up All In”), reunites the cast of both previous movies, and features the expected toe-tapping tunes and lowbrow humor, it lacks originality and runs out of steam well before the end credits roll.

Picking up where 2015’s “Pitch Perfect 2” left off, the Bellas, the award-winning a capella singing group, have graduated from fictional Barden University and entered the adult world.

Stacie (Alexis Knapp) is a personal trainer who is easily distracted by her male clients — resulting in an out-of-wedlock pregnancy (fortunately, she keeps the baby).

What these ladies really want to do is sing again as a team. So when Aubrey (Anna Camp) suggests they reunite and join an overseas USO tour, the Bellas are back.

“Pitch Perfect 3” turns into a road movie, a silly romp through military bases in Spain, France, Italy and Greece, each location offering an opportunity to showcase the bad behavior of these chanteuses, particularly Fat Amy.

“Yeah, well, we don’t do anything with dignity, OK?” she responds to an offended colleague. Indeed, they do not.

The USO tour is also a competition. Hip-hop artist DJ Khaled (playing himself) seeks a new opening act, and the Bellas are one of four groups in contention. Former judges Gail (Elizabeth Banks) and John (John Michael Higgins) show up to shoot a documentary about the quest.

A ridiculous subplot involving Fat Amy’s long-lost father, Fergus (John Lithgow), who seeks to embezzle her previously undisclosed inheritance, offers the chance for spy antics and pyrotechnics — a feeble attempt to inject vitality into a franchise running on empty.

The film contains an out-of-wedlock pregnancy, vulgar humor, sexual banter and a couple of crude terms. The Catholic News Service classification is A-III — adults. The Motion Picture Association of America rating is PG-13 — parents strongly cautioned. Some material may be inappropriate for children under 13.
– – –
McAleer is a guest reviewer for Catholic News Service.