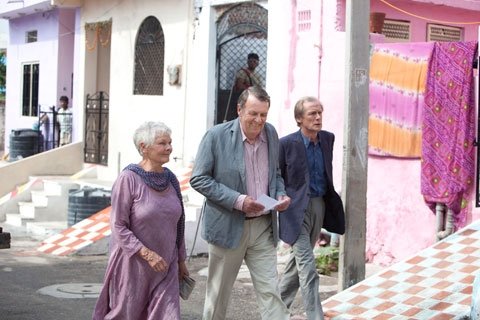 NEW YORK (CNS) — Cross "A Passage to India" with "Fawlty Towers" and you’ll get "The Best Exotic Marigold Hotel" (Fox Searchlight), a comedy-drama combination about seven elderly Brits searching for enlightenment — and excitement — on the Indian subcontinent.

Directed by John Madden ("Shakespeare in Love," "The Debt") and based on the 2004 novel "These Foolish Things" by Deborah Moggach, "The Best Exotic Marigold Hotel" offers a mixed, and problematic, moral message about the "golden" years, as crusty old fogeys let their hair down — and unleash their libidos.

Each has a different reason for wanting to escape to the East. Evelyn (Judi Dench), shackled by her late husband’s debts and her controlling children, longs to assert her independence. Unhappily married Douglas (Bill Nighy) and Jean (Penelope Wilton) aren’t quite ready for retirement in a drab assisted-living community.

Madge (Celia Imrie) and Norman (Ronald Pickup) are a couple of randy seniors on the prowl, looking for love — make that lust — in the fabled land of the "Kama Sutra."

Graham (Tom Wilkinson), a distinguished judge, returns to India where he lived as a boy. Openly gay, he seeks a reunion with his childhood lover whom he has not seen in 50 years. The movie both romanticizes his quest and invites viewers to endorse the relationship underlying it.

For Muriel, change and an uncertain future are terrifying. "At my age, I can’t plan ahead," she moans. "I don’t even buy green bananas."

Still, it’s off to India they all go, enticed by an advertisement promising elegant retirement living "in the proud tradition of the Raj" in Jaipur’s titular hostelry. It’s certainly exotic, but far from a five-star establishment. The dilapidated guesthouse is run by Sonny Kapoor (Dev Patel), a young man with big ambitions.

Sonny’s comic antics, the clash of cultures, and each traveler’s personal awakening is chronicled by the sympathetic Evelyn in her online blog. "India is an assault on the senses, a riot of noise and color," she says. "Nothing here has worked out quite as I expected."

And how. As each character’s staid existence unravels, Sonny exudes an unabashed optimism. "Everything will be all right in the end," he promises. "If it’s not all right, then it’s not the end."

Yet, in the end, "The Best Exotic Marigold Hotel" offers a skewed vision of the twilight years. Screenwriter Ol Parker’s script is on firm ground in presenting them as a time for forgiveness and reconciliation. But cutting matrimonial ties and embracing hedonism is no more recommendable toward the close of life than at any other age.

The film contains a benign view of premarital sex and homosexual acts, partial nudity, gruesome images of a corpse, some sexual innuendo and occasional rough language. The Catholic News Service classification is O — morally offensive. The Motion Picture Association of America rating is PG-13 — parents strongly cautioned. Some material may be inappropriate for children under 13.