The Best of Me - Catholic Courier 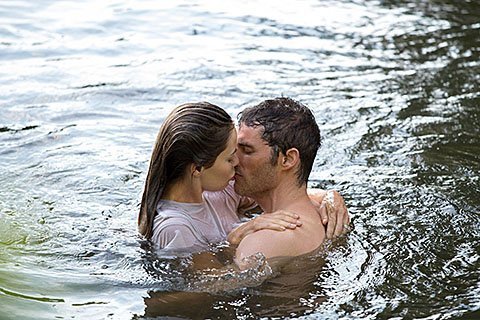 James Marsden and Michelle Monaghan star in a scene from the movie "The Best of Me." The Catholic News Service classification is A-III -- adults. The Motion Picture Association of America rating is PG-13 -- parents strongly cautioned. Some material may be inappropriate for children under 13.

NEW YORK (CNS) — Catholic author Nicholas Sparks, master of gooey romance, returns to the big screen with "The Best of Me" (Relativity), based on his best-selling 2011 novel.

All of Sparks’ hallmarks are here: a handsome cast, a picturesque setting, conflict and misunderstandings, innumerable shifts in chronology — and a veritable gusher of tears.

Predictability aside, director Michael Hoffman ("The Last Station") has crafted an entertaining but morally flawed drama about destiny, posing a perennial question: If given a second chance, would you pursue a lost love?

That’s the dilemma facing former high school sweethearts Dawson (James Marsden) and Amanda (Michelle Monaghan). The two are reunited after 20 years apart when they return to their small Louisiana hometown for the funeral of a mutual friend, Tuck (Gerald McRaney).

Sparks — no pun intended — still fly for this duo. "How do I fall back in love with you when I never stopped?" Amanda coos. Not so fast: She’s married to someone else, albeit unhappily, and there are unresolved issues from Dawson’s past.

That history is examined in flashbacks, as we follow the courtship of the young Dawson (Luke Bracey) and Amanda (Liana Liberato). They meet cute, but are from vastly different worlds. Amanda is from a refined Southern family. Dawson is poor, and subject to abuse by his drug-dealing father Tommy (Sean Bridgers).

After one beating too many, Dawson runs away, finding sanctuary with Tuck, who becomes his surrogate dad and guardian angel. Dawson’s love for Amanda grows, despite opposition from her family.

To reveal more about these star-crossed lovers over the next two decades would spoil the surprises of the rather improbable plot.

Suffice it to say, there are many shocking twists and turns on the road to reconciliation and redemption. There are also a number of ethical lapses at which J. Mills Goodloe and Will Fetters’ script winks, making this appropriate material for mature, discerning viewers only.

Needless to say, an extra box of tissues will come in handy for those grown-ups inclined to take this wild ride.

The film contains gunplay, domestic violence, drug use, benignly viewed adultery and nongraphic nonmarital sexual activity, an out-of-wedlock pregnancy and occasional profane and crude language. The Catholic News Service classification is A-III — adults. The Motion Picture Association of America rating is PG-13 — parents strongly cautioned. Some material may be inappropriate for children under 13.