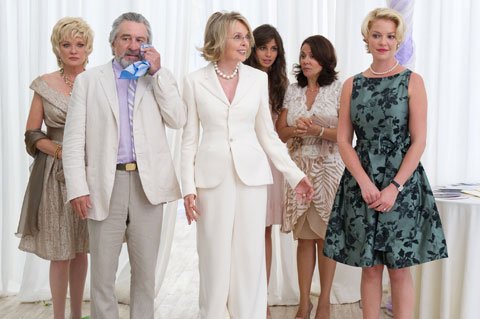 NEW YORK (CNS) — Ah, Hollywood! It’s a place where the RMS Titanic can be reconstructed down to the last detail and where audiences can be shown the unusual gait with which Abe Lincoln is said to have made his wise and melancholy way through the world. But, when it comes to a religion subscribed to by more than a billion people worldwide … well, why sweat the small stuff?
¬†
Thus the faux Catholicism that pervades the vulgar romantic comedy “The Big Wedding” (Lionsgate), the flagrant erroneousness of which is only the most annoying of this picture’s many defects.
¬†
We’re fairly warned of what we’re in for in this regard, though: The very first line of dialogue compares the church, in a muddled but decidedly derogatory way, to oral sex.
¬†
And just what kind of a church do we get on screen? The kind where Father Moinighan (Robin Williams) — a straw man in a Roman collar — breezily informs Alejandro (Ben Barnes) and Missy (Amanda Seyfried), the couple preparing for the titular nuptials, that their indulgence in premarital sex and use of birth control will land them in hell.
¬†
Father doesn’t seem especially troubled by this prospect, and the young ‘uns are far too sophisticated to take his smug, ham-handed condemnation as anything but a joke.
¬†
Alejandro — a Harvard grad, so we’re informed — also objects to the requirement that he promise to raise his children Catholic. Well, naturally he does, he’s educated, after all!
¬†
But Alejandro’s troubles with the faith are just beginning. In this same interview, he learns from Missy that his hyper-pious Colombian mother Madonna (Patricia Rae) — who hasn’t come to visit him in the States since she gave him up for adoption — unexpectedly plans to attend the forthcoming ceremony.
¬†
This sets up the film’s “Big Problem,” because Alejandro has never told Mom that his affluent adoptive parents, Don (Robert De Niro) and Ellie (Diane Keaton), are divorced.
¬†
Alejandro is so worried about the effect this scandalous bit of news will have on the perpetually rosary-clutching Madonna that he asks Don and Ellie to pretend they’re still married. They agree. Not surprisingly, however, the proposed arrangement leaves Don’s live-in girlfriend Bebe (Susan Sarandon) fuming.
¬†
As Don and Ellie’s awkward charade plays out, we get to know Alejandro’s sister Lyla (Katherine Heigl) — whose infertility has put her marriage on the rocks — as well as his brother Jared (Topher Grace). Jared is that supreme freak of nature in Tinseltown’s bestiary, the Adult Male Virgin.
¬†
As outmoded in his thinking as Father Moinighan, Jared, it seems, is “waiting for love.” Things could be worse, though; at least he’s not waiting for marriage.
¬†
Predictably, the arrival on the scene of yet another wedding guest, Madonna’s sultry daughter Nuria (Ana Ayora), soon has Jared reconsidering his eccentric resolve.
¬†
Bedroom complications — past and present — are all-too-amicably resolved in the lead-up to Don’s payoff toast. In this oration, he compares God to the Wizard of Oz and announces that, since there’s no one pulling the cosmic strings, we’d better make the most of love. Or something to that effect.
¬†
Overall, the message of writer-director Justin Zackham’s adaptation of the 2006 French-Swiss film “Mon Frere Se Marie” seems to be that — in a world with no man-behind-the-curtain to pay attention to — it’s fine to be confused as long as you’re not inhibited.
¬†
The film contains implied atheism, anti-Catholicism, flawed moral values, strong sexual content — including aberrant sex acts, rear nudity and a frivolous treatment of homosexuality and adultery — a couple of uses of profanity and much rough and crude language. The Catholic News Service classification is O — morally offensive. The Motion Picture Association of America rating is R — restricted. Under 17 requires accompanying parent or adult guardian.
¬†
– – –
¬†
Mulderig is on the staff of Catholic News Service.