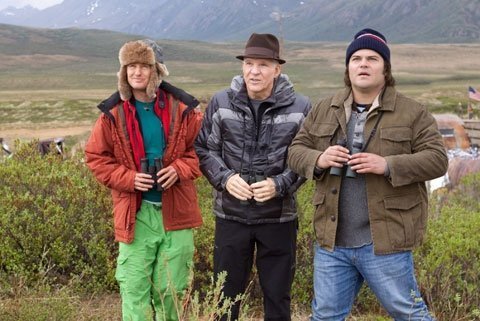 NEW YORK (CNS) — The warmhearted seriocomedy "The Big Year" (Fox 2000) takes its title from a real-life competition in which birdwatchers across the country vie to spot the greatest number of different species between one New Year’s Day and the next.

To the ever-increasing exasperation of his current spouse Jessica (Rosamund Pike), obsessive Kenny is out to defend his seemingly insurmountable previous record. Brad, whose life is going nowhere, hopes victory in the contest will represent the first tangible achievement of his adulthood, while Stu wants to use his participation in the informal tournament as a stepping stone to his long-deferred retirement.

Stu benefits from the understanding attitude of wife Edith (JoBeth Williams). But Brad, who still lives with his parents (Dianne Wiest and Brian Dennehy), finds his gruff father as unimpressed by his current project as by any that have come — and, invariably, gone — before.

While Kenny holds aloof from his fellow birders, Stu and Brad bond, forming an unlikely friendship as well as an alliance intended to best their sometimes unscrupulous rival. All three competitors, however, are eventually forced to decide how much they are prepared to sacrifice in their pursuit of the ultimate avian accolade.

As each of the trio answers that question in his own way, director David Frankel’s agreeable film — inspired by Mark Obmascik’s book of the same name and scripted by Howard Franklin — affirms the primacy of family life and personal relationships over materialistic or ego-driven goals.

The humor proffered as the story unfolds is better calculated to produce chuckles than knee-slapping hysteria. But at least the screenplay never goes fishing for laughs in the gross-out gutter.

That’s not to say that this generally cozy tale is entirely free of problematic elements.

One source of Jessica’s annoyance with Kenny, for instance, is that she is avidly pursuing a fertility treatment that will eventually require his presence on a particular day. This subplot is dealt with too obliquely, though, for a medically untrained viewer to be able to determine whether, once present, he will be called upon to act in a morally acceptable manner or otherwise.

Late-reel developments also lead to scenes that could be interpreted as signaling that two characters have taken to living together. But the evidence offered by the dialogue — and by the domestic activities portrayed — is, in the end, inconclusive.

The film contains brief nongraphic marital lovemaking, possible cohabitation, a fertility treatment theme, adultery references, at least one use of profanity, an obscene gesture and a few crude and crass terms. The Catholic News Service classification is A-III — adults. The Motion Picture Association of America rating is PG — parental guidance suggested. Some material may not be suitable for children.