The bishop of Rome: Presiding over the church in charity - Catholic Courier 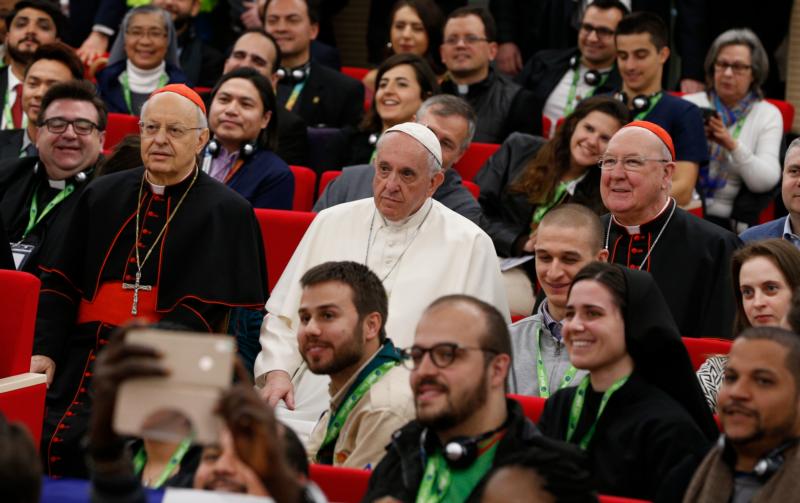 Pope Francis is pictured next to Cardinal Lorenzo Baldisseri, secretary-general of the Synod of Bishops, and Cardinal Kevin Farrell, head of the Vatican's Dicastery for Laity, the Family and Life, during a group photo at a pre-synod gathering of youth delegates in Rome March 19, 2018. The pope facilitates the work of the college of bishops in its care for the universal church by convening synods of bishops.(CNS photo by Paul Haring)

On March 13, 2013, Pope Francis stepped onto a balcony in St. Peter’s Square to greet the people of God. In his first public act as pope, he offered not only a greeting but also a lesson on the role of the pope in the life of the church.

The universal church, for which the pope exercises a ministry of pastoral care, is constituted by the communion of local churches (i.e., dioceses) stretched across the globe.

Each of these churches is constituted by the communion of the baptized with that church, who cooperate with the Spirit to make the risen body of Christ visible through their local languages and cultures. Each of these local churches is led by a bishop.

As Pope Francis addressed the crowd, he asked those gathered — many from the local church of Rome — to bless him, as their bishop, before he blessed them.

In doing so, Pope Francis lifted up an important teaching of the Second Vatican Council. Namely, any authority in the church is rooted, primarily, not in a particular office but in the communion of the church, united in the love of the Spirit. Indeed, all the baptized are empowered by the Spirit to preserve the apostolic faith and to build up God’s reign.

By asking the people of Rome to bless him, Pope Francis invited them into a dialogical relationship. He showed that the task of the bishop is not to lord over the people but to journey with them.

In his ministry of pastoral leadership, sacramental worship and teaching, a bishop is called to listen to the people and be blessed by their gifts of the Spirit as they seek to live together as the body of Christ.

But bishops also share a responsibility beyond the confines of their local churches. Through each bishop’s pastoral relationship with his local church, the bishops of the world share in a communion — the college of bishops — that symbolizes the communion of the communities they lead. Through this college, the bishops care for the universal church.

In fact, by asking the people of Rome to bless him as he began his ministry, Pope Francis reminded the world that he exercises his ministry as pope only because he is the bishop of Rome. As he said, “You know that it was the duty of the conclave to give Rome a bishop. It seems that my brother cardinals have gone to the ends of the earth to get one.”

For nearly two millennia, the local church of Rome has exercised care for other local churches within the communion of the universal church. Granted, the scope of the bishop of Rome’s ministry has developed under the guidance of the Spirit throughout church history — sometimes expanding and sometimes contracting.

Thus, as the bishop of Rome, the pope exercises a ministry within the life of the universal church, coordinating and symbolizing its communion.

In this role, Richard Gaillardetz notes in his book, “Ecclesiology for a Global Church,” “the pope confirms his brother bishops in the proper exercise of their ministry as pastors of local churches,” symbolizes the unity of the universal church through visits to local churches around the world, reflects on the faith of the church in encyclicals and apostolic exhortations as head of the college of bishops, and facilitates the work of the college of bishops in its care for the universal church by convening synods of bishops and, on rare occasions, ecumenical councils.

The pope, as bishop of Rome, may also exercise an extraordinary ministry of intervening in the life of another local church.

However, as Pope Francis has made clear, such intervention should be exercised on exceedingly rare occasions, when the communion, well-being and faith of the universal church must be safeguarded in way that cannot be addressed at the local level.

Today, the pope is more visible than ever before. People can read the pope’s tweets, check his Instagram account or watch videos of his latest spontaneous act of Christian charity on their phones.

This visibility has allowed Pope Francis to point to the meaning of what he calls missionary discipleship through his extraordinary witness to the Gospel in his daily life.

The pope’s oversight authority is likely to have little direct effect on our everyday lives. But his role as a symbol of the faith that all the baptized share can have a profound effect on our lives.

His visibility as the bishop of Rome does not ask us to build up a cult of personality around him. Rather, it asks us to consider how his words and witness challenge us to make the truth of the Gospel a reality in our own lives as we strive, in communion with all the baptized, to build up God’s reign on earth.

(B. Kevin Brown received his doctorate in systematic theology from Boston College and teaches theology in the religious studies department at Gonzaga University in Spokane, Washington. He is the editor of the “Proceedings of the Catholic Theological Society of America.”)