The Book of Eli - Catholic Courier 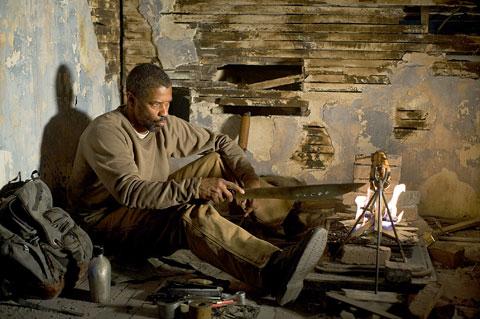 Directed by twin brothers Albert and Allen Hughes, "The Book of Eli" (Warner Bros.) prompts the question whether, assuming a minimum level of respect, the attempt to integrate religion and Scripture into a mass-appeal film is by itself laudable.

"The Book of Eli" exhibits sufficient reverence for the Bible, and yet its coarse language and violence — though not excessive when compared to many films of this ilk — could fuel the opinion that Hollywood should avoid all sacred texts. It does not endorse aggression as a means to redemption, however.

While dabbing them with morbid humor, the Hughes brothers don’t prolong the fight sequences, nor are the proceedings saturated in blood. The mayhem is balanced by frequent meditative passages. Moreover, next to the bleak depictions of humankind’s future that abound at the multiplex (last year’s adaptation of Cormac McCarthy’s novel "The Road" springs to mind) their vision is decidedly optimistic. Centering on a prophetic hero driven by faith and hope, "The Book of Eli" has more in common with the 2007 Will Smith vehicle "I Am Legend."

The character of Eli, portrayed by the always-convincing Denzel Washington, descends from the strong, mysterious strangers Clint Eastwood played in the so-called spaghetti Westerns of Sergio Leone, as well as from the spiritually potent protagonists in numerous Asian martial-arts films. In the near future, following a climactic disaster that precipitated "the last war," Eli has spent 30 years traversing the blighted landscape of the western United States carrying the only extant copy of The King James Bible.

Books were burned and libraries pillaged in the aftermath of the vaguely described apocalypse. Now, with survival a Herculean challenge, he skillfully defends himself and his precious cargo using a machete, bow-and-arrow, and gun. His belief that he’s shielded by God appears to be well-founded after he arrives at a dusty town run by Carnegie (Gary Oldman), whose marauding minions are charged with bringing him every book they can find.

Carnegie’s power derives from controlling the water supply, but he’s convinced his dominion over the surviving population will grow if he wields the words of the Bible. His blind, common-law wife, Claudia (Jennifer Beals), has a daughter, Solara (Mila Kunis), who eventually hits the road with Eli, becoming a disciple of sorts.

The production draws on everything from the dichromatic look of a John Ford Western to the camerawork and staging techniques deployed by action directors such as John Woo. Logic is not one of its strengths, but there’s plenty of visual texture and narrative substance to offset doubts.

How authentically Christian is Eli’s religiosity? Not only does he safeguard and transport the Bible, he reads it daily and quotes from it often. He also prays — most notably at the end of the film, when he gives thanks to God and confesses the sins he committed as the Good Book’s chosen courier. The most explicit expression of Christian doctrine comes when Eli tells Solara what he’s learned from his in-depth study of Scripture, namely, "Do more for others than you do for yourself."

In the same scene, he voices what might be a dig at those inclined to read the Bible too literally, clinging to the words while ignoring the spirit. "The Book of Eli" presents a parallel dilemma. It’s possible to excuse the movie’s more brutal moments by placing them in a broader context. It’s also possible to focus exclusively on its objectionable qualities and dismiss the project out of hand.

The film contains intermittent strong violence including gun- and swordplay and a killing intended to be merciful, much rough language, some crude language, and brief sexual innuendo. The USCCB Office for Film & Broadcasting classification is L — limited adult audience, films whose problematic content many adults would find troubling. The Motion Picture Association of America rating is R – restricted. Under 17 requires accompanying parent or adult guardian.