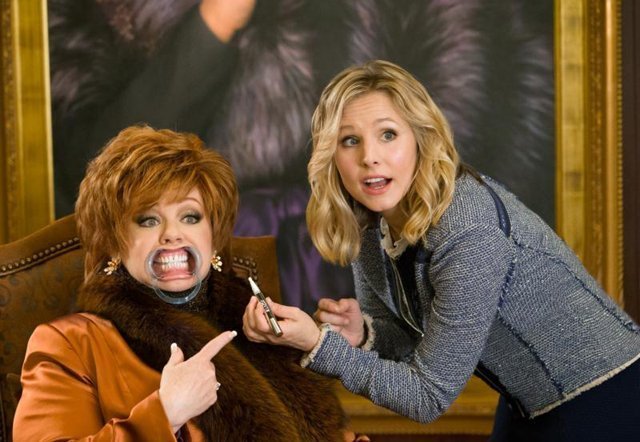 Melissa McCarthy and Kristen Bell star in a scene from the movie "The Boss." The Catholic News Service classification is O -- morally offensive. The Motion Picture Association of America rating is R -- restricted. Under 17 requires accompanying parent or adult guardian.
By John Mulderig
Catholic News Service
NEW YORK (CNS) — "The Boss" (Universal) is obviously intended as a comedy vehicle for its star and co-writer, Melissa McCarthy. Presumably, audiences were meant to be tickled by McCarthy’s brash humor and charmed by insights into her character’s vulnerable side.
Unfortunately, whether she’s blithely exposing her rear end to other members of the cast or working through the emotional problems bred during her childhood in an orphanage, McCarthy’s onscreen persona makes a thorough nuisance of herself. And her ill-organized adventures inspire more grimaces than giggles.
At least the starting point of her fictional biography is an institution presided over by a kindly nun, Sister Aluminata (Margo Martindale). However, as McCarthy’s Michelle Darnell swiftly grows into the famed businesswoman of the title, whatever credit with Catholic viewers the script — penned with director (and real-life husband) Ben Falcone and Steve Mallory — may have momentarily racked up is quickly squandered.
An entrepreneur and motivational speaker, Michelle enjoys a Tony Robbins-like ascent, only to suffer a Martha Stewart-style fall when Renault (Peter Dinklage), an ex-lover-turned-competitor, rats on her for insider trading. In what passes for a recurring joke in this movie, Renault’s real name, which Michelle insists on using, much to the annoyance of the pretentious eccentric himself, is Ronald.
Emerging from prison with her fortune confiscated and her reputation ruined, Michelle is given shelter by her long-suffering former secretary, Claire (Kristen Bell), and forms an uncharacteristic emotional bond with Claire’s preteen daughter, Rachel (Ella Anderson).
After attending — and predictably disrupting — a meeting of Rachel’s Girl Scouts-like youth organization, the Dandelions, Michelle strikes on an idea for a comeback. She’ll create a for-profit rival to the Dandelions, Darnell’s Darlings, as a means of marketing Claire’s outstanding brownies.
Dead-end subplots and trashy humor alternate with failed attempts at a more serious tone as Michelle’s scheme advances.
A large-scale catfight, an awkward discussion with Rachel about the fact that Claire’s boyfriend, Mike (Tyler Labine) had a sleepover with Mommy, as well as Michelle’s wholesale lack of modesty are all passed off as fodder for smiles. And there’s some gravely intended pseudo-feminist babble about how the Dandelions only prepare girls to be housewives but the Darlings will equip them for a career.
But you’ll likely forget that bit as soon as Renault starts threatening Michelle’s life … with a Samurai sword … on the rooftop helipad … of his skyscraper headquarters. As Rachel’s real-life peers like to say, "Whatever."
The film contains much slapstick violence, pervasive vulgar humor, drug use, an implied premarital encounter and relentless rough and crude language.
The Catholic News Service classification is O — morally offensive. The Motion Picture Association of America rating is R — restricted. Under 17 requires accompanying parent or adult guardian.
– – –
Mulderig is on the staff of Catholic News Service.
Copyright © 2023 Catholic News Service, Inc. All rights reserved. Linking is encouraged, but republishing or redistributing, including by framing or similar means, without the publisher's prior written permission is prohibited.