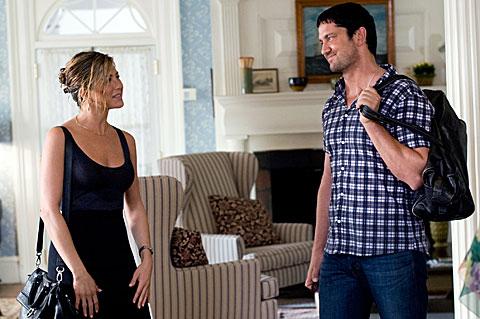 NEW YORK (CNS) — The mean-spirited proceedings that occupy most of the running time of "The Bounty Hunter" (Columbia/Relativity) — a muddled, easily forgettable mix of romantic comedy and crime story — begin when Milo Boyd (Gerard Butler), a washed-up former cop who’s now the fugitive tracker of the title, gets the delightful news that his latest target is his detested ex-wife, journalist Nicole Hurley (Jennifer Aniston).

A dedicated reporter, Nicole has ended up on the wrong side of the law after skipping a court date in order to pursue a potential case of police corruption.
The erstwhile couple’s charming interaction — Milo has little difficulty in tracking Nicole down — sees him locking her in the trunk of his car, her attempting to escape by jabbing him with a lighted emergency flare, his chasing after her and tackling her to the ground; and that’s all before a set of handcuffs and a Taser stun gun come into play.

In between taking their aggressions out on each other, the pair gets entangled in the conspiracy that got Nicole in trouble in the first place. So it’s not long before they’re on the lam together, dodging bullets from bad men in black vans and — far less successfully — a renewed hail of arrows from Cupid’s bow.

By this time, however, any potentially heartwarming elements in director Andy Tennant’s predictable tale of rekindling romance have long since been lost amid the frenetic shuffle.

The film contains some action violence, scenes of torture, brief rear nudity, several sexual jokes and references, about eight uses of profanity and a bit of rough and much crude language. The USCCB Office for Film & Broadcasting classification is L — limited adult audience, films whose problematic content many adults would find troubling. The Motion Picture Association of America rating is PG-13 — parents strongly cautioned. Some material may be inappropriate for children under 13.