The Cabin in the Woods - Catholic Courier 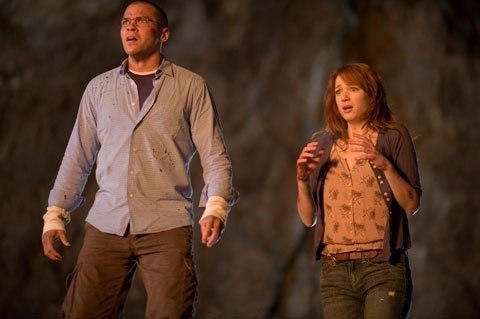 NEW YORK (CNS) — The quality of American horror movies seems to have been flatlining for a number of years now.
¬†
With the exception of a few genuinely scary outings — such as the “Paranormal Activity” series — most decent white-knuckle film experiences in recent times have come from foreign shores such as Spain, Korea and Japan, while offerings from the land of the free have seemed content to replace scares with mindless gore.
¬†
Co-writer Joss Whedon has claimed that “The Cabin in the Woods” (Lionsgate) is an attempt to move away from the horrific conventions of such “torture porn” as the “Saw” franchise and Eli Roth’s infamous “Hostel” series.
¬†
That intent is borne out, early on at least, in two significant ways: first, by director and co-writer Drew Goddard’s tongue-in-cheek take on various slasher-flick chestnuts; second, by the interesting premise that the remote house into which the deliberately two-dimensional ensemble of teenagers (Kristen Connolly, Chris Hemsworth, Anna Hutchison, Fran Kranz and Jesse Williams) inevitably retreat is actually being controlled and manipulated by a group of technicians in an unspecified laboratory.
¬†
Consequently, before the red stuff begins to ooze in profusion, “The Cabin in the Woods” is both intriguing and amusing as it relishes the very horror cliches it mocks. The two likable office techs in charge of the operation (Richard Jenkins and Bradley Whitford) provide good comic relief, and their various methods of making the teens act like well-known stereotypes will have horror aficionados nodding and chuckling in recognition.
¬†
Unfortunately, the homage to older movies becomes tiresome, as does the constant dropping of the F-word, the continual, placidly accepted drug use by one of the main characters, and a relentless recurrence of irresponsible sexuality.
¬†
Goddard and Whedon seem to sense that they’ve run out of ideas by about the halfway point. So they quickly resort to the scare-free blood-and-guts approach they claim to be mocking. The bad language and gore build up to a final 20 minutes that, in terms of foulness, rivals anything the purveyors of torture porn could muster.
¬†
The pseudo-mythological hooey with which the proceedings are eventually tricked out does nothing to mitigate the exploitative violence on screen, nor do the writer’s assurances that this is all done in irony.
¬†
These woods, it turns out, are anything but lovely dark and deep.
¬†
The film contains pervasive gory violence, a suicide, frequent drug-use, nongraphic nonmarital sexual activity with upper female nudity, some sexual humor, constant rough language, and some crude and profane expressions. The Catholic News Service classification is O — morally offensive. The Motion Picture Association of America rating is R — restricted. Under 17 requires accompanying parent or adult guardian.
¬†
– – –
¬†
Shaw reviews movies for Catholic News Service.