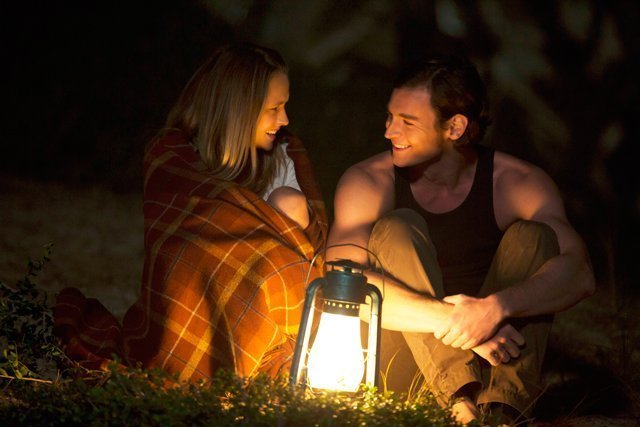 Teresa Palmer and Ben Walker star in a scene from the movie "The Choice." The Catholic News Service classification is A-III -- adults. The Motion Picture Association of America rating is PG-13 -- parents strongly cautioned. Some material may be inappropriate for children under 13.

NEW YORK (CNS) — Ever since "The Notebook" in 2004, film adaptations of Nicholas Sparks’ novels have descended into benign, prepackaged comfort food.

So it is with "The Choice" (Lionsgate). In keeping with the Catholic writer’s work overall, the movie tells an agreeably picturesque love story, with likable characters who briefly consider the morality of at least some of their actions. Yet, as directed by Ross Katz from Bryan Sipe’s screenplay, the picture is so intractably bland, straining not to offend, that its plot points lack allemotional tug.

The film retains Sparks’ traditional setting in coastal North Carolina, affording an opportunity for montages of moonlit beaches. There’s also a light wash about religious faith, or at least cosmic forces that control the universe.

Thus, veterinarian Travis Shaw (Benjamin Walker) doesn’t believe in God, but does believe in the power of love. Hospital intern Gabby Holland (Teresa Palmer) chooses to believe in something bigger than herself — without, however, giving the entity in question a specific name.

Travis’ widowed father, and fellow vet, Shep (Tom Wilkinson) — who’s so kindly that he’ll give a little girl a new lizard rather than tell her that her pet has died — is a more-or-less conventional churchgoer.

Lik ethe geography, the theme will be familiar to Sparks’ fans: "Now pay attention, because I’m about to tell you the secret of life," Travis announces at the opening. This is followed by, "Every decision you make leads to another choice."

In reality, there are just two choices. The first is Travis and Gabby’s decision, after a series of miscues, to fall in love, even though both are in long standing, albeit dull, relationships. That takes up the entire first hour, and is followed by marriage, two children, general bliss and many sunsets. (The couple’s option for sex before vows apparently requires no deliberation.)

The second decision is an ethical one: whether to continue extraordinary means of life support following a car crash on a stormy night. In a better-written drama, this would be the meat. Here, it’s just an excuse to pile on more cheese.

The substance of the decision isn’t shown. There’s not even much of a discussion. Either way, however, there’s no danger that Catholic moral norms concerning medical treatment will be flouted — or that viewers’ sympathy will be elicited in support of their violation.

What we’re really doing is biding our time in the hospital until we can return to the seaside.

The film contains brief semi-graphic premarital sexual activity with partial nudity, at least one mild profanity and several crude terms. The Catholic News Service classification is A-III — adults. The Motion Picture Association of America rating is PG-13 — parents strongly cautioned. Some material may be inappropriate for children under 13.