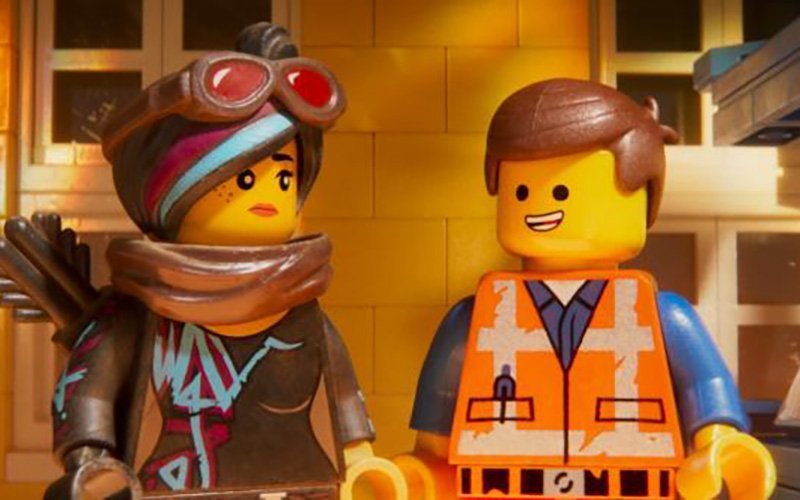 This go-round, Phil Lord and Christopher Miller turned the directing reins over to Mike Mitchell (“Shrek Ever After”), but remained as co-writers, serving up the expected preponderance of puns and bounty of belly laughs that made the original animated movie so popular.

The signature dance tune, “Everything is Awesome,” returns, along with a new one, aptly titled “Catchy Song,” with the oft-repeated lyric, “This song is gonna get stuck inside your head.”

Duplo, for the uninitiated, are the larger-sized plastic bricks designed for toddlers, making this movie an intergenerational battle between Duplo’s shiny hearts and rainbow-hued unicorns, and Lego’s edgier characters and gritty vehicles.

Even as his rubble-strewn city is nicknamed Apocalypseburg, Emmet remains a cockeyed optimist, much to the frustration of his lady love, Lucy (voice of Elizabeth Banks). He is forced to rise to the occasion when Lucy and a gaggle of his Lego friends, including Batman (voice of Will Arnett), are suddenly whisked off into outer space.

The kidnapper is Queen Watevra Wa’Nabi (voice of Tiffany Haddish), the Duplo ruler of a far-off galaxy where everything is equally awesome, but doused in sparkles. She lives up to her exotic name (“Whatever I Wanna Be”), deciding at whim to morph into a variety of exotic shapes.

The queen has but one goal: to marry Batman and unite the universe, bridging the Lego-Duplo gap. Batman, world-weary cynic that he is, wants no part of her scheme.

Meanwhile, Emmet, intent on a rescue mission, finds an unexpected ally in a space cowboy named Rex Dangervest (also voiced by Pratt). A send-up of Pratt’s roles in the “Jurassic World” and “Guardians of the Galaxy” franchises, Rex is hard-nosed and fearless, with a crew of obedient raptors on his space ship.

In Rex, Emmet finds his alter ego and inner warrior, and together they set off to save the day.

“The Lego Movie 2: The Second Part” features a dizzying array of settings and characters. Older viewers will enjoy the multiple cameos and inside jokes from a diverse cast including presidents (Abraham Lincoln), action-film stars (Bruce Willis), scientists (Marie Curie), and even a Supreme Court Justice (Ruth Bader Ginsburg).

This family-friendly film offers positive messages about (no puns intended) making connections, bridging the gaps among friends and family members, and constructing a world where people respect one other, no matter their differences.

The film contains cartoon mayhem, some peril and mild rude humor. The Catholic News Service classification is A-I — general patronage. The Motion Picture Association of America rating is PG — parental guidance suggested. Some material may not be suitable for children.