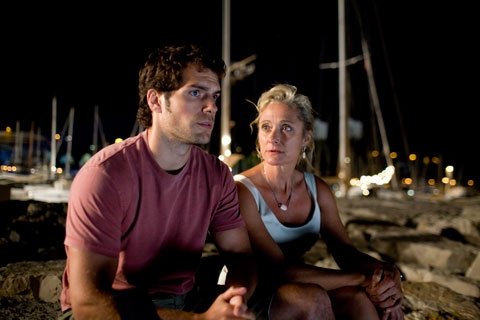 NEW YORK (CNS) — As it sluggishly unfolds its far-fetched plot, the easily forgettable action adventure "The Cold Light of Day" (Summit) makes for feeble entertainment. Amid the mayhem of frantic gun duels and hectic car chases, director Mabrouk El Mechri fails to provide viewers with much reason to care.

This is the fish-out-of-water story of ordinary businessman Will Shaw (Henry Cavill). Will finds himself unexpectedly caught up in the world of espionage after his family is kidnapped during a yachting vacation off the coast of Spain, and he learns that his father Martin (Bruce Willis), whom he believed to be a cultural attache, is in fact a CIA agent.

All this leaves bewildered Will trying to meet the kidnappers’ demands, which basically amount to the return of a purloined briefcase (read MacGuffin), even as he strives to avoid falling into the clutches of dad’s tough-as-nails colleague Carrack (Sigourney Weaver), who may or may not be a traitor.

With no one to trust, Will goes on the lam, accompanied — eventually — by Lucia (Veronica Echegui), a Madrid office worker whose family connections have gotten her mixed up with the warring operatives as well.

Witnessing serial broad-daylight gun-downs and vehicular sprees through the Spanish capital that send more than a few extras scrambling for safety, unengaged moviegoers may have enough attention left over to ask themselves if the metropolis’ entire police force has taken simultaneous vacation time.

The film contains considerable violence, some of it harsh and gory, adult themes, several instances of profanity, at least one use of the F-word and occasional crude and crass language. The Catholic News Service classification is A-III — adults. The Motion Picture Association of America rating is PG-13 — parents strongly cautioned. Some material may be inappropriate for children under 13.