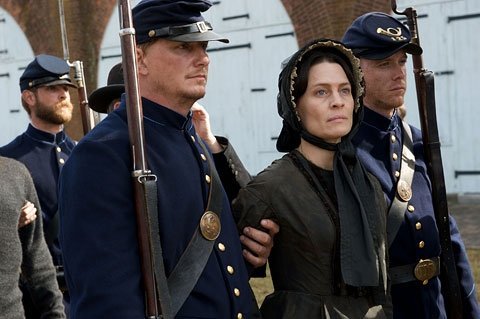 NEW YORK (CNS) — Nearly 150 years after she became the first woman in U.S. history to be executed by the federal government, Mary Surratt — the titular character in the engrossing historical drama "The Conspirator" (Roadside) — remains a controversial figure.

Hanged in 1865 for complicity in the plot to assassinate Abraham Lincoln, lingering questions about Surratt endure. Chief among them: What exactly did this devoutly Catholic, pro-Confederate widow know about the conspiracy to shoot the president, and when did she know it?

Like everyone else at the time, young Union Army officer-turned-lawyer Frederick Aiken (James McAvoy) thinks he knows. Arm-twisted into representing Surratt by Reverdy Johnson (Tom Wilkinson) — the Unionist senator from Surratt’s home state of Maryland — Aiken is initially convinced of his unwanted client’s guilt.

As the owner of the Washington boardinghouse where John Wilkes Booth (Toby Kebbell) and his co-conspirators — including her own son John (Johnny Simmons) — met to mature their nefarious schemes, first to kidnap Lincoln, later to slay him, Surratt (movingly portrayed here by Robin Wright) surely must have known — so the reasoning goes — what was being planned under her roof.

As he witnesses the ruthless legal maneuvering that results, Aiken begins to shift his views. His new, more sympathetic outlook leads to friendship with Mary’s daughter, Anna (Evan Rachel Wood). But it also threatens his social standing as a well-respected veteran, and alienates Sarah (Alexis Bledel), his socialite fiancee who has faithfully awaited Aiken’s return from service.

In recounting an episode with obvious implications for contemporary debates about the proper treatment of accused terrorists, director Robert Redford avoids heavy-handed politicking. Instead, his portrait of a protagonist admirably committed to the rule of law is made all the more effective by the fair assessment of those — like Stanton and Holt — with other legitimate priorities.

A similarly balanced approach characterizes the portrayal of Surratt’s faith. Her Catholicism, symbolized by the rosary she carries with her in prison and to the scaffold, is shown to further enflame Northern public opinion against her. (It’s appropriate to bear in mind, in this regard, that the bitterly anti-Catholic, anti-immigrant Know-Nothing Party enjoyed some modicum of political success in the time leading up to the Civil War.)

Fugitive John Surratt is sheltered by priests — apparently, judging from the setting, the Jesuits of Georgetown University. Some viewers may interpret one priest’s defense of the protection offered him as a veiled reference to the church’s alleged failure to cooperate in the prosecution of more recent escapees from justice, namely clergymen accused of child sexual abuse. James Solomon’s script, though, never makes this connection explicit.

The historical value of this impressive, predominantly fact-based recreation makes "The Conspirator" possibly acceptable for older teens, despite the elements listed below.

The film contains some wartime gore, a realistic hanging and a couple of crude and crass terms. The Catholic News Service classification is A-III — adults. The Motion Picture Association of America rating is PG-13 — parents strongly cautioned. Some material may be inappropriate for children under 13.