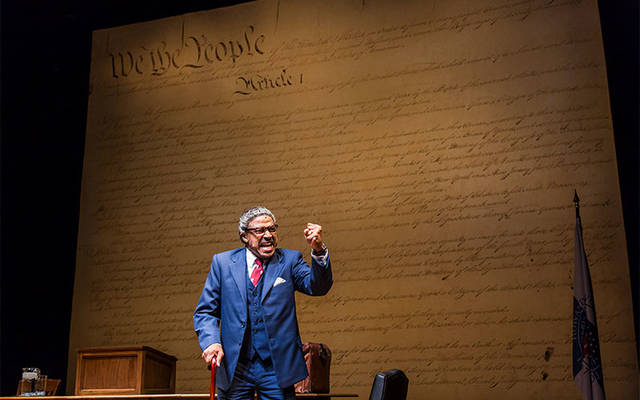 The incredible story of Marshall, who served 24 years on the Supreme Court, is being told by Lester Purry in a one-man tour de force at Geva Theatre Center through Nov. 18. The play is set at Howard University, from which Marshall received his law degree after being rejected by the University of Maryland Law School. He went on to represent the first black man to be accepted at the school.

The show touches on Marshall’s many historic cases as a young lawyer, including Brown v. Board of Education that desegregated schools, and the danger he faced. In one scene, we hear of how Marshall was almost lynched by an angry mob in Columbia, Tenn.

Marshall believed in changing society by using the weapon of the law. He would often cite the phrase etched on the Supreme Court building, “Equal Justice Under Law.”

While truly inspiring, the show reminds us: The more things change, the more they stay the same.

What do urban public schools look like nowadays? Enrollment data from the New York State Education Department shows that 90 percent of students in the Rochester City School District are students of color, while the numbers are opposite for many suburban schools. Those numbers look like segregation.

According to the Brennan Center for Justice, several states enacted voter identification laws after the Supreme Court’s 2013 decision in Shelby v. Holder that rolled back the Voting Rights Act of 1965.

Perhaps if we considered the sacrifices made by courageous souls like Marshall — who fought for equal rights — we could heal the divisions that persist in our great nation.