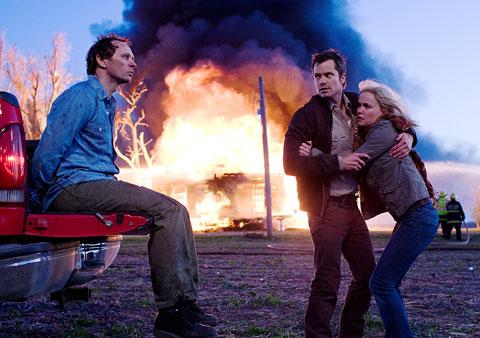 NEW YORK (CNS) — Maniacs take over Main Street in the rural rampage "The Crazies" (Overture). Despite relatively lavish production values and some well-known stars, director Breck Eisner’s updating of George A. Romero’s low-budget 1973 horror exercise carries on in the unfortunate tradition of what the Office for Film and Broadcasting termed the original’s "blood-spurting … mayhem."

This is all the sadder since the plot — hinging on an environmental accident and the Army’s efforts to quell its disastrous effects at any cost — could have been used as the basis for a timely and thought-provoking parable about ecological irresponsibility and military excess in the face of a public emergency.

Instead, the contamination of the water supply in a previously idyllic farming community, which results in the transformation of much of the population into the homicidal lunatics of the title, leads only to formulaic slicing and dicing, typified by the dispatch of several nameless victims by means of a pitchfork through the vitals.

Doing their best to fend off such a fate — and at the same time evade capture by the gas-masked military — are local sheriff David (Timothy Olyphant), his deputy Russell (Joe Anderson), his pregnant wife Judy (Radha Mitchell), the town doctor, and her office assistant Becca (Danielle Panabaker). Reacting to the crisis with a combination of solidarity, resourcefulness and four-letter exclamations, the quartet dodge the gun-toting or knife-wielding zombies who were once their neighbors.

By the time the government’s response ushers in a preposterous climax, any human interest in the story has been as thoroughly gutted as the imaginary heartland village that provides its setting.

The film contains excessive gory violence, some gruesome images, at least a half-dozen uses of profanity and pervasive rough and much crude language. The USCCB Office for Film & Broadcasting classification is O — morally offensive. The Motion Picture Association of America rating is R — restricted. Under 17 requires accompanying parent or adult guardian.